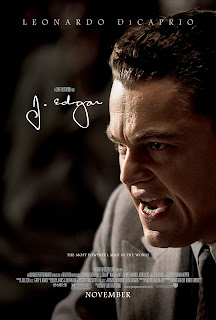 It takes a while to get used to Leonardo DiCaprio's performance in Clint Eastwood's J. Edgar. The over-innunciated cadences, the carefully controlled diction, it all seem like a put-on. It's almost presentational in its blatant theatricality. It's distracting, at first, because one could easily mistake it for a bad imitation. But as the film progresses, one realizes what a remarkable piece of acting it really is, because DiCaprio is playing a man whose entire life was a performance. Each meticulously crafted syllable, each exaggeratedly pronounced word, were all a real-life put on to hide the real man beneath.

DiCaprio's J. Edgar Hoover was not only a stutterer, prone to tongue tied fits in moments of extreme stress, but an extremely private man who spent most of his life trying to bury the man he truly was. His mother (Judi Dench), while not an overbearing woman, demanded greatness of her son, and had trained the stutter out of him, resulting in the peculiar speech patterns we recognize today. But if Eastwood and screenwriter Dustin Lance Black's vision of Hoover is to be believed, a stutter wasn't the only thing Hoover was trying to ignore. 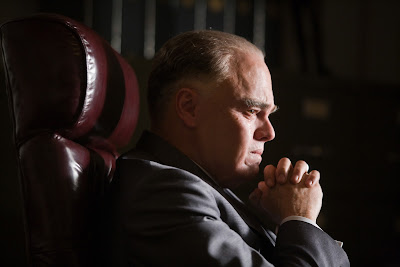 In J. Edgar, Hoover is a man trying to live up to his mother's expectations of greatness, and despite his meteoric rise to power as the first director of the FBI, it never quite seemed like enough to a man whose own perfectionism rivaled that of his mother. What the film essentially is, is a love story. It's rarely spoken and hardly acknowledged, but is keenly felt between Hoover and his longtime companion, Clyde Tolson (Arnie Hammer), who spent their lives side by side without ever truly accepting the true nature of their relationship. In that regard, J. Edgar is an epic tragedy, a complex portrait of a complex man for whom power was the ultimate drug. Hellbent on serving his country and protecting it from its enemies, he became increasingly paranoid and overzealous, keeping damaging files on everyone from Eleanor Roosevelt to Martin Luther King. As his power increased, so too did his paranoia, and the man who was credited with founding many of the police procedures we know today that has helped solve countless crimes, became a symbol of the dangers of unlimited power.

Eastwood, however, never takes a firm stance on Hoover, eschewing typical negative and positive portrayals for something much more nuanced. Hoover was far too complicated a figure for that kind of black and white portrayal. J. Edgar is a complex portrait of a complex man, directed in Eastwood's trademark no nonsense, no frills style. This isn't a conventional Hollywood biopic either.  It flows in a non-linear style, like the recollections of an old man looking back on a full life. It provides an impression of the man rather than a simple timeline of events. However, perhaps most impressively, Eastwood masterfully blends fact with fiction, combining factual elements with Hoover's life with his own inflated view of himself. In that way, J. Edgar is both a historical portrait and a psychological exploration of the self-aggrandizement of a very small man living a very big life, and we never quite know where the historical Hoover ends and the fictional Hoover begins. 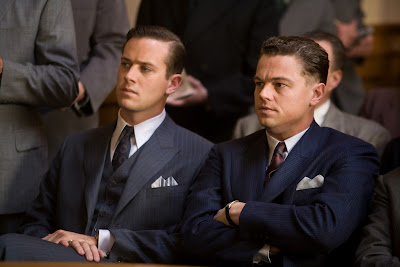 That's a very appropriate and smart approach, I think, because it is very likely Hoover couldn't differentiate between the two either. He saw himself as a hero defending liberty when he often did just the opposite. But Eastwood isn't interested in condemning the man, he's much more interested in what made him tick. This is not a judgemental film, it is a restrained and surprisingly human film, with such a heartbreaking relationship between two men at its core that its almost hard to believe it came from legendary tough-guy, Clint Eastwood. It is a very subdued and button-up love story, but it is a love story nonetheless. Hoover wasn't free to be his own man, and as such he created a larger than life persona that he lived in every day. J. Edgar exists in that place where the two men meet, the real Hoover and his heroic persona, crusading against evil wherever he saw it while his true self was cowering in the closet, scared and alone.

Even under pounds of old age makeup, DiCaprio still makes us feel for this man. Say what you will about Hoover as a historical figure, but in Eastwood's capable hands, we have a strong and evenhanded portrait of a man whose many facets can't be put in a simple box. It's a gripping and fascinating film, humming with an electric undercurrent of sexual tension that is something of a new territory for Eastwood, who at 81 years old continues to churn out strong, quality films, and J. Edgar is not only his best work since 2008's Gran Torino, but one of his strongest of the last decade.