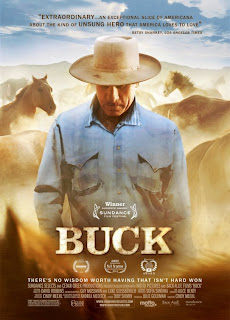 My acting has required me to work a lot around horses for the last several years, and while I'm certainly no expert (far from it), it has given me many chances to observe these majestic creatures in action. I've also gotten to see first hand many of the ideas put forth by renowned horse trainer, Buck Brannaman, whose legendary skill with difficult horses helped inspire the novel, The Horse Whisperer (he also served as an adviser and double for director/star Robert Redford).

"Your horse is a mirror to your soul," Brannaman says, "and sometimes you may not like what you see. Sometimes, you will." The horse, you see, reflects the rider riding it, and that has been central to Buck's philosophy for many years. In Cindy Meehl's lovely new documentary, Buck, we explore not only the roots of that philosophy, but also what makes Brannaman tick as a man, from his troubled childhood to his current travels across the United States.


Brannaman is the product of an abusive home, where his tyrannical father, who ran a trick roping show, pushed his two sons to unattainable standards of perfection, beating them whenever they made even the slightest mistake. After the death of his mother, the abuse only got worse, until finally someone noticed and intervened, landing him in the foster care of a woman who became like a second mother to him. Instead of letting it bring him down and wallowing in his own misfortunes, Brannaman used it as a driving force behind his success, determined to overcome the darkness of his past. He took his love of horses and his skills he learned from his father to become one of the most influential horse trainers working today, revolutionizing the way people care for and train their horses.

Today he travels all across the United States, holding clinics for horse owners, many of whom are having behavioral problems with their horses. However, Brannaman points out that it's usually not people with horse problems, it's horses with people problems, and that most issues can be corrected by fixing how the person deals with their horse. It is a deeply personal brand of animal training, one that takes patience and skill, something that Brannaman displays in spades.


There is something strangely moving about watching Brannaman work with a horse. It's almost magical - a deep connection between man and animal that is almost breathtaking to behold. Brannaman is a real American cowboy, but just about as unassuming as it is possible to be. He's humble, and completely devoid of the brash bravado that has become such a cowboy cliche. He's as real as they come, and Buck captures his kind, quiet spirit, placing it against a sprawling natural backdrop, as if Brannaman himself embodies the soul of the American cowboy.

Brannaman would never claim such a thing, of course. And those who aren't particularly interested in horse may find it a tough slog, as it tends to drag in the middle. First time director Meehl has an almost awe-struck reverence for Brannaman, which seems to run contrary to his "aw shucks" demeanor, but it's hard to deny the mysterious, almost ancient connection he shares with the horses. When focusing solely on him, the film is a fascinating character study. When it focuses on his training it tends to wander a bit, getting bogged down in the details when the real star is Brannaman himself. It's difficult  not to come away from Buck feeling somewhat in awe. It has a strange and enigmatic beauty, bringing the myth of the American cowboy to startling and compelling life.