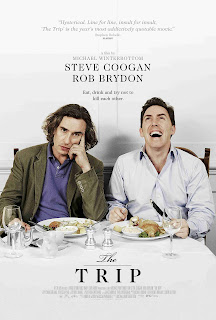 One's enjoyment of Michael Winterbottom's The Trip depends a lot on one's tolerance for droll British comedy, because the film is often so droll as to be nearly nonexistent. Reprising their roles as themselves from Winterbottom's 2006 comedy Tristram Shandy: A Cock and Bull Story, Steve Coogan and Rob Brydon set out on a cross country journey after Coogan is hired by the Observer to review fine restaurants.

Brydon, Coogan's best friend, is a last minute replacement for Coogan's girlfriend, much to Coogan's chagrin, who now has to listen to his endless nattering for miles on end.

Together, the two of them eat, bicker, and do dueling impersonations of celebrities such as Michael Caine, Liam Neeson, Dustin Hoffman, and Sean Connery, while sampling some of the finest food in the country and lamenting about the state of their careers.

Brydon has achieved some level of success due to his somewhat obnoxious silly voices, a sticking point for Coogan whose career seems frustratingly stagnant. This creates an added layer to their relationship, as Coogan's fruitless attempts to be taken seriously as an actor provide some of the film's more interesting moments. In between the moments of clever, mostly improvised banter, The Trip becomes a somewhat melancholy exploration of loneliness and midlife angst. It is a more successful look at showbiz distress than say, Sofia Coppola's Somewhere, but the problem is it has a tendency to meander. The film has no real direction per se, and doesn't really add up to a satisfying whole despite some fine moments of acerbic wit and probing reflection.

The self reflexive nature of the film is admittedly attractive, it blurs the line between fiction and reality a decidedly witty air. But it just kind of exists, never really asserting its own unique personality. It sort of aimlessly floats along for nearly two hours with a pleasant sort of droll charm, but the final result lacks the punch that could have made it truly memorable.