Review: "The Temptation of St. Tony" 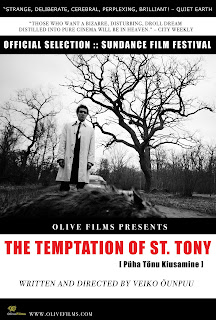 "Why does man exist?" a mourner ponders as he attends a funeral at the beginning of Veiko Õunpuu's The Temptation of St. Tony, cuing the audience in right from the get go that this isn't the kind of film that asks simple questions with easy answers.

On the contrary, The Temptation of St. Tony is a surreal, labyrinthine puzzle of a movie that plays like a collaboration between David Lynch and Luis Buñuel. There are no easy answers or even descriptions that can quite sum up the many layers and metaphorical digressions of Õunpuu's haunting dream world, and he lets us know immediately that he will be taking the road less traveled, beginning the film with a quote from Dante's Inferno: "Midway upon the journey of our life, I found myself within a forest dark, for the straightforward pathway had been lost."

It is an appropriate beginning, as the film is, in many ways, a psychological and emotional descent into Hell, tracing the evolution of one man's very bad day into an existential nightmare and descent into madness. 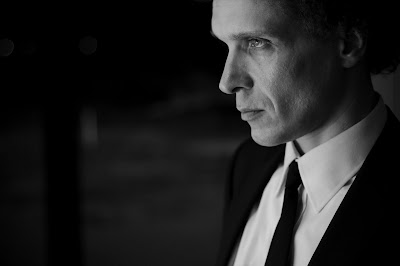 Taavi Eelmaa as Tony in THE TEMPTATION OF ST. TONY. An Olive Films release.
Filmed in striking black and white, the stark contrast suggesting the title character's inner struggle of light and dark, The Temptation of St. Tony is a deeply metaphorical trip down the proverbial rabbit hole for one man whose life begins to lose its meaning. Tony (Taavi Eelmaa, whose face recalls that of a silent film star) is a mid-level executive mourning the death of his father who is about to experience the worst day of his life. A series of chance encounters set events into a downward spiral, as runs over a dog in his car, and accidentally discovers a field full of severed hands as he drags the dog's body off the road. Frightened and perplexed, he goes directly to the police, only to discover that they are less than helpful. While at the police station, he meets a kidnapped girl on the run, and discovers that his wife is cheating on him, but his trials and tribulations are just beginning.

Along his travels, he encounters a priest, and begins to question the benefits of being good. Why be good if it will only bring misfortune and suffering? Tony is like a modern-day Job, trying desperately to be good in an increasingly dark world, only to have his efforts thrown back into his face, or forced to do something against his conscience, such as close his boss' factory and lay off the entire staff who are all struggling to make ends meet. The bizarre encounter with the priest shakes Tony to his core, and opens the door for a nightmarish flood of tribulation that will change Tony forever. 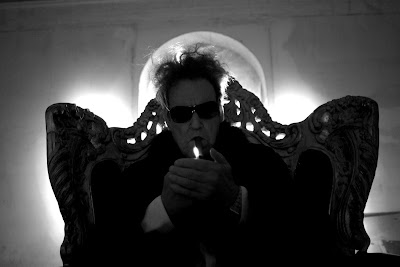 A scene from THE TEMPTATION OF ST. TONY. An Olive Films release.

Õunpuu creates a compelling and memorable atmosphere, in large part due to the masterful work of cinematographer Mart Taniel who gives the film its surreal, dreamlike quality. However the film's avant-garde tendencies are often as much of a hindrance as a positive. For a film whose entire reality is hinged on the audience's acceptance of its inherent absurdity, it is often a bit too symbolically dense for its own good, piling on metaphor after metaphor and chasing aimless digressions that may or may not have any meaning whatsoever. It is intentionally disorienting, often in the tradition of the early surrealists, creating dream imagery that feels like an actual dream. We become just as lost in Tony's world as he does, which is both richly compelling head-scratchingly frustrating. It's lack of narrative form (despite a powerful formal visual aesthetic) ultimately bewilders as much as it enthralls.

There is a lot to feast upon in Õunpuu's nightmarish vision. It is a layered and lyrical film, both drolly funny and eminently disturbing, and demands repeat viewings to fully appreciate. There is so much here to untangle in Tony's unhinged world as he grapples with some of the biggest questions man has to ask. Credit must be given to Õunpuu for daring to tackle such massive and important questions, but one must wonder how much of the result is as deep as it thinks it is. Still, The Temptation of St. Tony is a staggering and enthralling work that finds profundity in absurdity, suggesting that man's questioning of the cosmic scheme is ultimately folly, and in many ways meaningless. Whether or not the film is similarly meaningless is in the eye of the beholder, but Õunpuu ensures that the quest for answers, whether they exist or are simply hollow projections, will be anything but boring.