Review: "Eccentricities of a Blonde-Haired Girl" 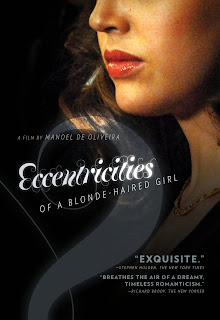 On the surface, Manoel de Oliveira's Eccentricities of a Blonde-Haired Girl seems like an odd trifle of a film. At barely over an hour long, the film barely seems to get started before it's over - a small whisper of a doomed romance caught in the conflicted social mores of a bygone era.

De Oliveira, who was 101 years old when he made this film and is still going strong (his newest film, The Strange Case of Angelica, just had its North American premiere at the Toronto Film Festival), filters this tale (based on the 19th century short story by Eça de Queirós) through the lens of another time. While set in present day, the characters seem caught in a time warp, citizens of the past doggedly trying to make it in a modern world, each one trapped by their devotion to outdated social mores. That is the magic of Eccentricities of a Blonde-Haired Girl. It's an old story, almost Shakespearean in portrayal of family relations and tragic romance, but set almost idiosyncratically in a distinctly current time - the story told by our protagonist to a complete stranger while commuting on an electric train. 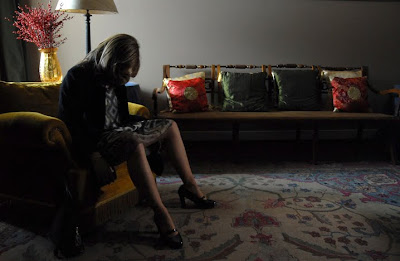 It is that jarring juxtaposition of the modern and the antiquated that gives the film its elegantly strange charm. Our storyteller and guide into this world is Macário (de Oliveira's grandson, Ricardo Trêpa), a lowly accountant at his uncle's textile shop, who one day spies a beautiful young woman (Catarina Wallenstein) at the window across the street. He is immediately drawn to her, with her long flowing blonde hair and delicate Chinese fan she carries with her everywhere she goes. She is an enigma, an unattainable object, until one day she and her mother walk into his uncle's store.

It's a storybook love at first sight moment, and their first meeting, framed by de Oliveira as a long, lingering close-up, is a striking moment of understated fire. Macário becomes consumed by a desire to know her, and finally gets his chance at a posh dinner party, which becomes a kind of lovely digression as de Oliveira takes the time to allow a poetry reading to provide a quiet backdrop to a seemingly mundane scene of unspoken attraction. But that is de Oliveira's great genius - his knack for finding power in what is left unspoken. He takes seemingly ordinary occurrences and imbues them with an almost imperceptible weight. On second viewing, the scene totally transforms into a haunting instance of foreshadowing that hints at the titular "eccentricities" that will play a major roll later in the film. 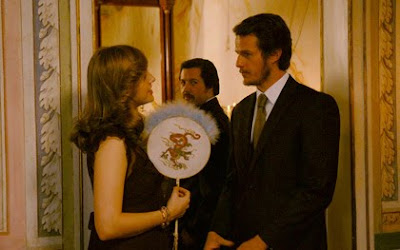 Soon, Macário wants to marry the girl, whose name, it turns out, is Luísa. But his uncle forbids it, and when he refuses to give up his dream of marriage, he is fired from his job and thrown out of his house. Unable to provide for her the life he wants for her, Macário takes a mysterious job far away. But a series of misfortunes suggests darker things to come, and the difficulties of their innocent romance will soon lead them to unexpected places.

Each one of them seems to be living in a gilded cage, whether it be that of their own strenuously formal dialogue or suggested in de Oliveira's meticulous framing, these people are trapped in set of circumstances both of their own devising and out of their control. The outmoded societal conventions coupled with their own timidity and weakness conspires against them. What at first seems stilted and awkward reveals itself to be careful and deliberate, an assured master's exploration of craft and character using every trick in his artistic palate. Eccentricities of a Blonde-Haired Girl is a kind of grown-up fairy tale, a very bleak fairy tale, but a fairy tale nonetheless. De Oliveira is a kind of cinematic poet, a Portuguese bard whose film seems to defy time and place. It transcends the delicate intricacies of language by remaining fixed in its own sense of time while seeming effortlessly timeless. It is both of the past and the present, as if it could be anytime or anywhere or nowhere at all. It is of its own time and place, it is anywhere and everywhere, and de Oliveira beckons us into a peculiar and beguiling world whose treasures will continue to reveal themselves with repeated viewings. Like the pages of a great, well-worn book, the words and images of Eccentricities of a Blonde-Haired Girl are truly something to be savored, and will continue to reveal their riches to those with the patience to find them.