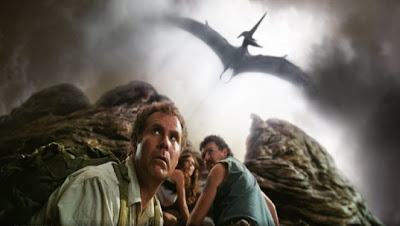 Surprisingly enough, I think many critics are missing the point when it comes to Brad Siberling's agreeably goofy, intentionally bizarre Land of the Lost. It's completely random and nonsensical, but that's the whole point.

One of the best reviews I've read of it so far was written by The Houston Chronicle's Amy Biancolli, who understands the film's borderline surrealist aesthetic:

Everyone, it seems, was determined to make this big-screen parody as retro-trippy as humanly possible, utilizing lizard suits, woozy Theramin music and scenes that Salvador Dali might have cooked up for a stoner movie...It all amounts to a certain brand of comedy — something closer to long-form Dada than conventional humor.

Is it a good movie? Well that's up for debate. It's definitely not for all tastes, but it's most certainly not the disaster it's been made out to be. I think most people just don't know what to make of it.
Email Post

Daniel said…
I think you're right on here. I won't defend it as a great movie on any traditional merits, but in the right mood it can be pretty entertaining.
1:12 PM