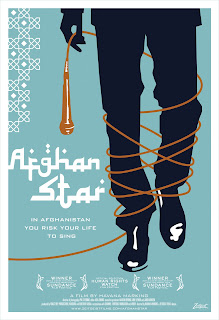 It's hard to imagine, as an American who is used to all the freedoms and privileges that that entails, a show like American Idol being anything more than a pop culture sensation. To say that it has any deeper meaning or social significance is almost laughable. But to a country just coming out from under the oppressive rule of a radical Islamic regime, a televised talent competition could bring the modern world rushing in in a way few other things could.

For Afghanistan, the show Afghan Star is more than just a talent competition. It is a social and cultural watershed moment that is for many their first encounter with the democratic process. With music having been banned under Taliban rule, Afghan Star brings both modernity and multiculturalism to Afghanistan, as contestants from all walks of life and ethnic backgrounds compete for the title.

That is probably the show's most commendable and most problematic element. For most people, it is the contestant's ethnicity that defines their allegiance more than their actual talent. Not that the finalists chronicled in Havana Marking's new documentary, Afghan Star aren't talented, but it is a shame to see the competition come down to voting along ethnic lines. 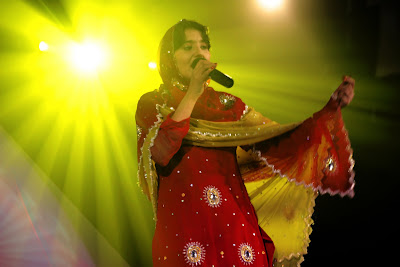 Contestant Lima Sahar on stage in AFGHAN STAR, a film by Havana Marking. A Zeitgeist Films release.
The film takes its cues from other documentaries such as Spellbound and Mad Hot Ballroom, following four contestants from the early stages of the competition to the final performance, each one coming from a different ethic background. While Marking focuses on the contestants and their on-the-road campaigns for the title, the real political undercurrents seem to get overlooked. Ethic and gender politics play a huge role in what's going on here, and while that occasionally comes to the fore, the musical aspect is what really takes center stage. Credit must be given to Marking for focusing on the show's unifying elements, there is often less Slumdog Millionaire and more Kite Runner at work here.

For all the progress Afghanistan has made in even allowing a musical competition to take place, it is still shocking to see such a national uproar when one of the contestants dances on stage, even to the disgust of her fellow competitors. The controversy is so huge that the show is threatened with being shut down, while she is met with death threats and must be put under protection. They've come a long way just to get to Afghan Star, but they still have a long way to go. 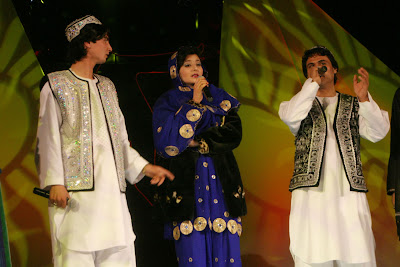 Contestants Rafi Naabzada (left) and Lima Sahar (center) on stage in AFGHAN STAR, a film by Havana Marking. A Zeitgeist Films release.
Structurally, Afghan Star is nothing new. From that standpoint, it's a pretty standard competition documentary. But the subject is something new and extraordinary. Afghan Star is so much more than a reality show, it is a microcosm of the birth of a new democracy, of a free people facing the dawn of a new day. It isn't always a smooth transition, and while Marking occasionally misses prime opportunities for deeper studies of the the subjects at hand, the film is both compelling and emotionally involving. As a sociopolitical cultural study, Afghan Star is completely fascinating, even if it ultimately leaves you wanting more.

Nick Plowman said…
Yeah I agree. It was quite shocking, kinda, and my lord, it left me wanting more. Thought it would be better.
4:51 PM