Review: "The Stoning of Soraya M." 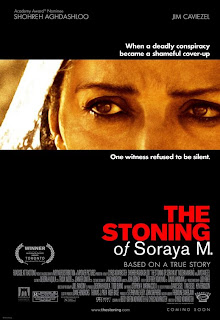 Cyrus Nowrasteh's The Stoning of Soraya M. (Roadside, 6.26) could not have been released at a better time. With the social upheaval surrounding the recent election in Iran taking center stage in the world's focus, suddenly everyone is taking a much harder look at Iranian culture and politics.

With the young people taking the fate of their country into their own hands in a reaction against the oppressive Islamic rules of the past, Iran is in a state of violent revolution. The Stoning of Soraya M., based on the best selling non-fiction book of the same name by Freidoune Sahebjam, takes an unforgettable look at the barbaric practice of execution by stoning, still practiced in many places throughout the world. It is the punishment demanded by strict adherence to Islamic Sharia law for the crime of adultry.

Set in 1986, the film begins with French journalist Sahebjam's (Jim Caviezel) car breaking down in a small village near the Iranian border. But something is amiss in this tiny town, and when he meets Zahra (Shohreh Aghdashloo), a frantic widow who has urgent news, it becomes quickly apparent that the little village has a dark secret. 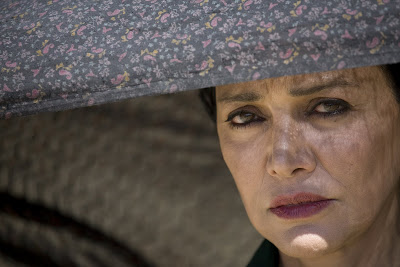 Zahra insists that Sahebjam listen to her story, so that the world may know what is going on in Iran. What unfolds is a haunting and disturbing tale of deceit, betrayal, and pure human barbarism, as Zahra's neice, Soraya (Mozhan Marno) finds herself falsely accused of adultry after her husband takes up with a 14 year old girl. Desperate to get rid of his wife in accordance with Sharia law, he conspires with the village's illigitimate mullah to have her accused of sleeping at another man's house. As the rumor mill begins to turn in the small town, everyone, including her own sons, turns against Soraya, and the town's moral fervor soon results in her horrific death by stoning in the town square.

It is a grim and shocking tale of not only man's inhumanity to man, but of the plight of women in an oppressive Islamix society living under the iron fist of the Ayatollah. As Soraya's husband openly cavorts with a 14 year old girl, it is she that bears the brunt of the law's moral outrage. It is a society where women are totally marginalized, and through the courage of Soraya and Zahra, the story has now been heard, and it is even more powerful and important than ever. 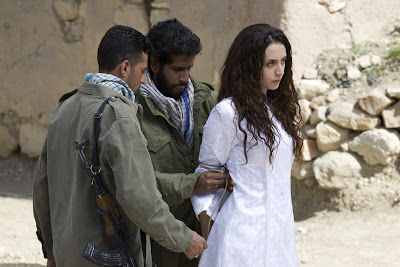 The film itself, however, isn't without its problems. The Stoning of Soraya M. is essentially a melodrama, and it has the tendency to veer off into overwrought histrionics, especially in its cliched and manipulative final shot. It's beautifully filmed and superbly crafted, but I think it would have benefited from a gritter, more hard edged treatment, a trap that 2007's The Kite Runner also fell into. It almost feels overproduced...too beautiful for such repulsive subject matter.

The actual stoning, on the other hand, is every bit as shocking and unbearable to watch as it should be, in many ways echoing the torture scenes from The Passion of the Christ (and not just because of the presence of Jim Caviezel and John Debney's ethnically rich score) in its graphic ferocity. The searing images and powerful performances ultimately overpower the sometimes overripe direction, and the audience is left with the feeling that it has witnessed something truly powerful, and indeed, quite important. It is a respectable and solidly made melodrama whose lofty intentions are more noble than they are effective. But with a strong mix of first rate performances and unforgettable images, The Stoning of Soraya M. is a film that leaves a lasting impression.