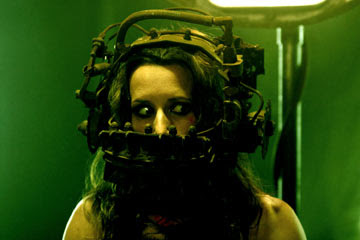 The ‘Saw’ horror films have been voted scarier than the horror classic The Exorcist.

The series, which has just spawned its fourth film, tells the story of an evil torturer who puts his victims through a set of horrific moral and physical trials to see if they have the will or the wit to survive.

In one sequence, a man must cut the key to a booby trap from behind his eye with a scalpel before he is killed.

At this present time, the series sits at the top of the poll for MSN Movies, garnering 17pc of the votes over the Exorcist’s 16pc.

The Exorcist, made in 1973, tells the tale of a young girl possessed by a demon. It remains notorious today for its blasphemy, visceral horror and depiction of a child swearing and performing a sex act with a crucifix.

The Shining is currently in third place with 14%.

Really? Saw is scarier than The Exorcist? Than The Shining? Than Alien? Than Halloween? One has to wonder what these people are thinking. The Saw series isn't scary. It's bloody. There's a difference. 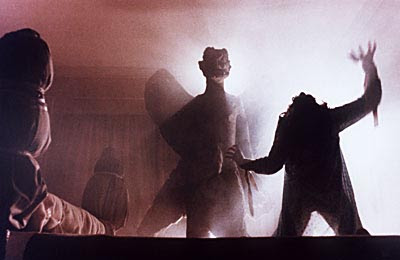 Are audiences just getting dumber? Seriously...what happened to scary films that truly frightened, that truly got under your skin? The Exorcist and The Shining played with your mind, they were intelligent films that were scary because they took the time to tap into something primal.

Saw films just throw gore on the screen and assume grossing us out is the same thing as scaring us. And audiences are dumb enough to be fooled.

It's just another sign at how low filmmaking, and in turn our culture, has sunk.
Email Post
Labels: horror films Saw