More on The Kingdom from The Sunday Times:

Mindful of the sensitivities, Berg has prefaced his film with a three-minute history lesson, a computer-animated sequence that charts Saudi-Western relations from the discovery of oil in the 1930s through to the cataclysmic events of September 11, 2001. At this particular screening, though, as the introduction concludes with the image of an airliner gliding towards the towers and a respectful fade to black, the reverential, pin-drop silence in the cinema is punctured by a gleeful “ba-boom” from the auditorium.

Ba-boom? This is one of my main problems with The Kingdom, it had so much potential to explore foreign relations and the current political climate, but it decends into a "rah-rah shoot the ragheads" actioner. 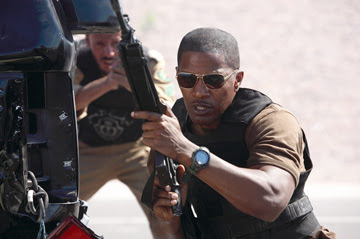 Berg said that was not his intention, but what did he expect a majority of American movie-goes to think? The sad truth is Americans go to the movies to turn off their brains, not to contemplate themes of global implication.

In The Kingdom, the fictitious but very plausible atrocity is the suicide bombing of a compound in Riyadh (similar attacks happened there in 2003), in which the deaths of 100 or so American workers, slaughtered while playing baseball and the like, must be avenged, if not judicially, then at the point of one of Mann’s beloved M16s. Of course, its makers deny any John Wayne leanings. “It’s not a jingoistic Team America Destroys Paris movie,” defends Mann. Neither is it, adds Berg, “a bloodthirsty, pro-American sense of, ‘Let’s go and kill some f***in’ Arabs.’ It’s not. It’s truly not”.

Try telling that to the enthusiastic early reviewers and patriotic bloggers (“In a season sure to be dominated by Meryl Streep movies about the war, it was nice to see one that actually bothered to have us as the good guys,” reads one). Preview audiences have been equally yee-ha (“The numbers were so high that the studio was confused,” says Berg). Which suggests that, for all Hollywood’s liberal posturing, the American public might just be a bit tired of all that self-flagellation and prefer to have a good old-fashioned, guilt-free crack at the baddies.

That is part of what's wrong with this country today. Our "enemy" has become so dehumanized that we no longer see them as people. When we can no longer understand what we're fighting against, what we have is an endless cycle of violence and misunderstanding - a point The Kingdom tries to make in its final moments. But it is too little, too late.
Berg, however, seems to know this:

Indeed, Berg has since expressed regret about choosing a patriotic, heroic outcome for his film over several bleaker alternatives. “I do think it’s not entirely realistic,” he apologises. “I boxed myself into a corner. Next time that won’t happen.” Like it or not, he seems to have made the first war-on-terror film simply to accept the conflict as an unchangeable reality, the backdrop for a buddy cop flick – CSI: Riyadh.

I'm glad he realizes the mistake. Berg is obviously a talented filmmaker (I was very impressed with his previous film, Friday Night Lights), but this case sounds like he bowed to the wishes of low-minded test screening audiences.
The following quote especially gave me pause:

“We had an incredible screening,” Berg recalls. “We very concerned that we were perhaps going to have a more negative reaction than we wanted. But the cheering and laughing and clapping that was there in the American audience was all there, and then some, in London.” Afterwards, a focus group was asked to explain why they had rated the film “excellent” on their score-cards. “A Muslim woman put her hand up – full head covering, the robe. She leaned forward and said, ‘Kick-ass action.’”

I guess it should be a good thing that Muslim audiences were not offended. But honestly, it bothers me that people can be okay with anything as long as it offers "kick-ass action."
Who cares if it sends the wrong message?
Email Post
Labels: Peter Berg The Kingdom