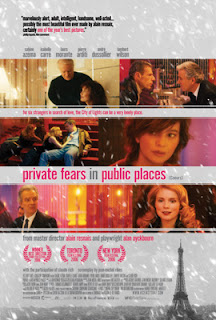 The Winston Salem Cinema Society, in conjunction with the Southeastern Center for Contemporary Art, will be screening Alain Resnais' Private Fears in Public Places this Sunday at 2 PM.

...under the surprisingly nimble direction of 85-year-old Alain Resnais, a veteran of the French New Wave (a movement that gave rise to the likes of Jean-Luc Godard and Francois Truffaut back in the early '60s), "Private Fears" skillfully avoids any cliché that might have brought it down. If anything, it resembles a less grim version of "Closer," itself a much darker examination of failed relationships, crossed with the upbeat and cheerful "Love Actually." "Private Fears," despite its rather bleak subject matter, is never depressing or hopeless. Resnais has crafted a tender and bittersweet mosaic not just of loneliness but of the unexpected connections we find when we least expect it that have nothing to do with romance. I'm talking, of course, about family and friends - two subjects that often take a back seat to romantic love in the film world.