DVD Review | "Mary Pickford: The Muse of the Movies" 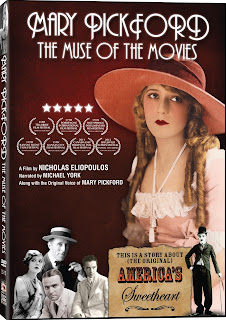 There may never be another movie star quite like Mary Pickford. Often referred to as "America's Sweetheart," Pickford was the original movie star - the first actor to have her name placed on the marquee above the title, and one of the most popular actresses in the history of cinema.

Cinema was still a brand new art form when Pickford came along, still barely past the plotless "actualities" of the early 1900s and before the feature length motion pictures of the 1910s. Pickford was the first of her kind, a trailblazer whose influence is still felt today. Her relationship with matinee idol Douglas Fairbanks was legend. They were the original Hollywood power couple, their Hollywood mansion, Pickfair, becoming the epicenter of the comings and goings of cinema society. Pickford and Fairbanks, along with Charlie Chaplin and D.W. Griffith, founded United Artists, the first movie studio to be run by the artists themselves.


Nicholas Eliopoulos' new documentary, Mary Pickford: The Muse of the Movies, which premiered this past week on DVD from Cinema Libre, explores Pickford's life in her own words, examining her influence on the early days of cinema, and her importance in shaping the young art form into the medium we know today. While the film often seems like a long special feature from a DVD of one of Pickford's film, it is nevertheless a fascinating look at the star that will certainly engage both casual fans of cinema history and diehard film buffs alike.

It is difficult for modern audiences to imagine the kind of American royalty that Pickford became at the height of her career in this age of instant celebrity. But Pickford truly was the birth of the modern movie star, the beginning of the glamorous, larger than life opulence that would come to define what it means to be a star. But Pickford was so much more than just a pretty face. She was active behind the camera as well, often writing her own films and pushing herself as an actress, revolutionizing American film acting by focusing on a more naturalistic style that stood in stark contrast to the popular pantomime style of European films. Her films, and especially her "little girl" character (which she played into her 30s) may not translate particularly well to modern audiences unaccustomed to silent film, but her influence on the history of cinema remains. Her talent remains just as timeless and magnetic as it ever was, and while Eliopoulos' film is hardly revelatory, it offers an engaging overview of the life of one of the brightest stars the world has ever seen.