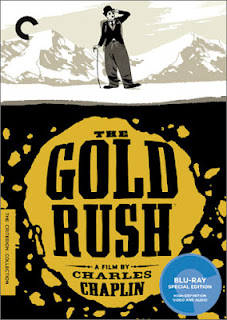 There were few figures of the silent era that were as wildly popular in their time as Charlie Chaplin. Because of the universal nature of silent film, whose intertitles were easily translated into different languages, easing their exports to foreign countries and making international stars out of the likes of Chaplin and his friend Mary Pickford.

While D.W. Griffith's The Birth of a Nation is often pointed to as the first mega-hit, Chaplin's The Gold Rush (1925) is frequently considered to be the first international cinematic sensation. Chaplin's appeal had no language barriers, and his iconic Little Tramp character was easily recognized the world over. It was the highest grossing comedy of the silent era, making it Chaplin's greatest commercial success, as well as one of his most enduring. While not as emotionally astute, perhaps, as The Kid (1921) or his masterpiece, City Lights (1931), The Gold Rush features two of the finest set pieces of his career.

Set in the Klondike gold rush of the early 20th century, The Gold Rush follows the adventures of the Little Tramp as he tries unsuccessfully to stake his claim and seek his fortune. Instead he comes across the cabin of a wanted murderer, where he takes shelter from a blizzard with a fellow prospector who has just hit the mother lode. Chaos and hilarity, of course, ensue, as hunger begins to set in and his new friend begins to imagine that he's a large chicken in his hunger crazed state. Soon, the Tramp meets a girl, and sets about trying to impress her the best way he knows how, while his friend suffers a blow to the head that erases his memory of where he left his gold.

The aforementioned sequences involve Chaplin stabbing two rolls with forks and using them as dancing feet (a gag originally performed by Fatty Arbuckle, and later recalled by Johnny Depp in Benny & Joon), and a house teetering on the edge of a cliff that the Tramp must keep precariously balanced. The Tramp's love interest is played by Chaplin's own mistress, Georgia Hale, whom he left his wife, the film's original star, Lita Grey, for after she became pregnant during production and was forced to drop out. Perhaps because of this, the film spends a great deal of time fawning over Georgia, something that Chaplin scaled back when he rereleased the film in 1942.

After the semi-silent Modern Times (another one of his masterpieces) in 1936, Chaplin finally gave up on silent pictures, nearly a decade after the advent of sound. Silents were now completely obsolete, and so too, it appeared, was the Little Tramp. But in 1942 Chaplin recut and rereleased The Gold Rush with new narration replacing the intertitles. A tighter 72 minutes (a full 16 minutes shorter than the original version), Chaplin considered the '42 version to be his definitive cut of The Gold Rush, and most critics agree with him. However I prefer the original 1925 release, which has been pieced together and restored here after having been effectively abandoned by Chaplin. The narration in the '42 cut seems forced and hokey, distracting from the visual wit of Chaplin's comedy. The original cut is more pure, a work of greater finesse and subtlety which the '42 release essentially blunts.

Both versions of the film are presented on Criterion's excellent new blu-ray release. While the '42 version has better image quality due to the varying qualities of the sources that the 1925 restoration had to be culled from, both versions look exquisite. The supplements are certainly up to Criterion's usual high standard, detailing Chaplin's re-edit of the film and its subsequent restoration to its original glory. Most historians will probably point audiences, especially those unaccustomed to silent film, to watch the sound version, but thankfully the original version is now available in its best possible form to entertain an all new generation of Chaplin fans. Chaplin may have made better films during his career, but his unique charm remains just as timeless as ever.