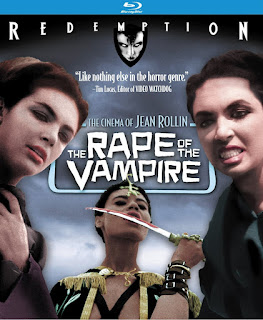 Oddly enough, the first of these films, and the 10th in Kino's Redemption line, is Rollin's very first film, The Rape of the Vampire (1968). I thought it was odd that it wasn't included in the first round of Rollin releases, but after watching the film it's pretty clear why - it's honestly not very good.

It's no wonder - all copies of the script were lost in the first two days of shooting, and the rest of the film was shot on the fly, which explains its rambling, directionless style. Rather than mold the film on his own, Rollin instead chose to allow the film to plot its own direction as he filmed. With no plan and no script, the production of The Rape of the Vampire was a mess, and it shows on screen.

Rollin's only black and white film, The Rape of the Vampire is a bizarre, nonsensical tale of a psychiatrist who tries to convince four vampires that they are actually just mentally ill, while they are convinced they are ageless creatures of the night who were once raped by the villagers. Split into two distinct parts that have little to nothing to do with each other (half of which is a pseudo-remake of the 1943 film, Dead Men Walk, starring Dwight Frye), the film is a mostly experimental work, presaging Rollin's penchant for surrealism in later films. There are some great shots to be found here, but the film itself is just a disorganized mishmash of seemingly disconnected scenes. 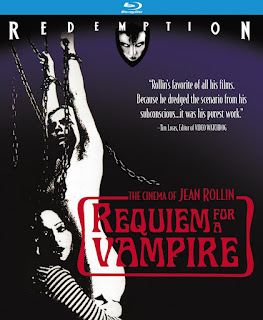 Rollin made two features, The Nude Vampire (which was released as part of Kino's first Rollin bundle) and Strange Things Happen at Night before, 1971's Requiem for a Vampire, which was his first film to receive a US theatrical release, where it was released as Caged Virgins. Rollin's films were always marred somewhat by producer mandated nudity in order to sell more tickets, but Requiem for a Vampire is perhaps the most overtly pornographic of his oeuvre.

Rollin considered Requiem for a Vampire to be his favorite of his films. Drawn almost completely from his subconscious, the film plays into his surrealist tendencies far better than Rape of the Vampire did just three years prior. Having clearly learned from the mistakes of his previous films, Requiem is a more pure, streamlined work that seems plucked from some sort of strange dream. It's a nearly wordless tale of two schoolgirls (dressed as clowns, no less) who run away from school and stumble upon the torture dungeon of the last vampire. 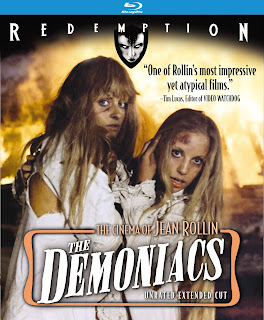 "Straightfoward" is a word that must be taken with a grain of salt when discussing Rollin, because he always deals in such a dreamlike realm. But The Demoniacs is actually more of a ghost story, and a pretty good one at that.

The film centers around twin girls (as Rollin films often do, but these are different  twins from those in Requiem and Lips of Blood) who are raped and murdered when a band of "wreckers" lure a ship to its doom on a rocky coast. The girls then return from the grave with the help of the devil to take their revenge.

I was reminded somewhat of the Twilight Zone episode, "The Howling Man," in which the Devil is trapped in an old castle, much like the ruins found in The Demoniacs, where he is found by the girls, who sleep with him in order to gain his powers. I'm not the first to make such a comparison, Video Watchdog's Tim Lucas also notes the similarities in his excellent liner notes included with all three films. While he dealt mostly with the horror genre, Rollin's films are usually more surreal than scary, products of the subconscious mind. But The Demoniacs is something of a different animal, an eerily gripping work that is hampered only by its frequent breaks for gratuitous sex scenes. It's interesting watching these films and imagining what they could have been had Rollin been forced to include such erotic elements that make so little sense. As such his films remain mostly curiosities, mildly diverting oddities for fans of horror and exploitation cinema.

Kino's loving presentations perhaps lend more importance to these films than they ultimately deserve, but it's hard to complain in the face of such comprehensive releases. The Rape of the Vampire features two Rollin short films made prior to his feature film career, and the transfers are mostly excellent considering the source of the films (Requiem, perhaps the most beautiful of the three, actually fares the worst transfer-wise). Fans of the first five Rollin releases from Kino won't want to miss these three new discs. While they aren't quite as good as the first round, Kino clearly remains devoted to Rollin and the rest of the Redemption catelogue, and continue to do right by these strangely fascinating films.