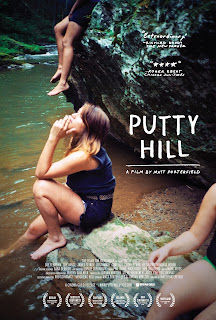 The landscape of the American independent film has changed drastically in recent years. Being an "independent film" no longer means what it meant 15 years ago. With studio specialty wings specializing in "independent" films, independent filmmaking has drifted away from the grittier, more experimental meaning it once had into more glossy quirky fare like Juno and The Kids Are All Right.

A few filmmakers have endeavored to reverse this bastardization of the pioneering indie spirit - directors like Ramin Bahrani (Man Push Cart, Goodbye Solo) and Kelly Reichhardt (Old Joy, Wendy and Lucy), whose films have continued to explore complex themes in new and surprising ways. 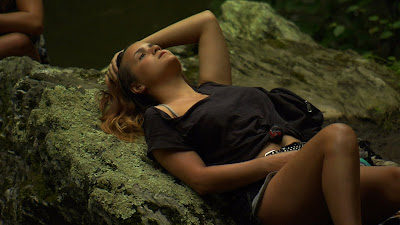 Zoe Vance in Matt Porterfield’s PUTTY HILL. Photo by Jeremy Saulnier.
Courtesy of Cinema Guild.
Part documentary, part narrative film, Putty Hill is an unusual mix of genres and styles that offers a glimpse into a small town's grieving process after the death of a local teen from an apparent drug overdose. The film pieces together snippets of varying reactions from those who knew him, and those who only knew of him, as they try to understand what happened and what it means to them. Even those who weren't friends with him are forced to come to terms with their own mortality in a world that no longer seems certain.

Porterfield combines interview footage with scenes of the town's everyday life to create an illusion of reality, but the result is more distracting than involving. Knowing that it the film is not, in fact, a documentary, pulls the audience out of the world Porterfield is trying to create. The dialogue, which is mostly improvised, feels forced, like actors trying to sound natural but speaking in a way in which no one really speaks. It just doesn't feel right. The performances are stiff and self-conscious, and despite the film's strenuous attempts to feel real, it always comes across as an approximation of realism - a kind of Brechtian epic theatre Grund Gestus reality that seems to say "I am like this character" not "i am this character." The nagging sense of artifice amongst such painstaking realism is off-putting and ultimately near fatal to the film's goals. 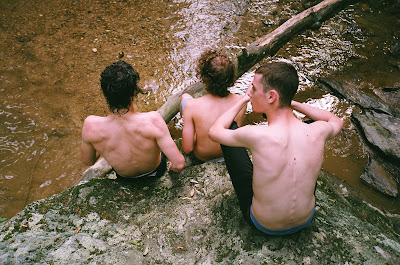 Andrew Laumann, David Jacober and Walker Teiser (from left to right) in Matt Porterfield’s PUTTY HILL.
Photo by Joyce Kim. Courtesy of Cinema Guild.
It doesn't help matters that the narrative/doc aesthetic seems more self-conscious than natural. The whole thing comes off more like a pretentious film school project than anything else. And while credit must be given for attempting such a brazen experiment, the experiment is ultimately a failed one. It never gives us any reason to care about these characters, or for that matter, to believe them. It's a languid, aimless, formless exercise in cinematic snobbery that feels neither honest nor real. Its lack of structure and often muddy sound mix leads to tedium, which leads to disinterest, which is a fatal combination for any film. Here, however, it's desperate attempts to seem meaningful make it all the more egregious.

There are few things in cinema more annoying than a bad film that thinks its a great one. It's an abstract kind of putting on airs that immediately sets the audience against it. Putty Hill is that kind of film - a nearly unbearable piece of self-congratulatory claptrap trussed up to look like art.