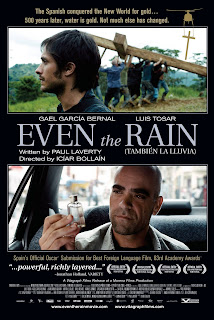 The American release of the Spanish film Even the Rain (También la Lluvia) could not have come at a more appropriate time. With the recent overthrow of the Egyptian government through peaceful protests, the themes of real life social change that permeate the film seem even more timely.

Set against the backdrop of the real life "water war" that took place in Bolivia in 2000, Even the Rain is the story of a film crew that descends on Bolivia looking to make a low budget film about Christopher Columbus - with the local natives as cheap labor. By getting the locals to dress up as indians for $2 a day, the production saves a lot of money, which is the top priority for the film's producer, Costa (Luis Tosar). But when civil unrest breaks out as foreign companies privatize the nation's water supply, charging outrageous prices to the poor villagers, even going so far as to ban the collection of rain (hence the film's title), the production of the film is threatened - especially when one of their main actors, a poor Bolivian named Daniel (Juan Carlos Aduviri) becomes one of the leaders of the country's water revolution. 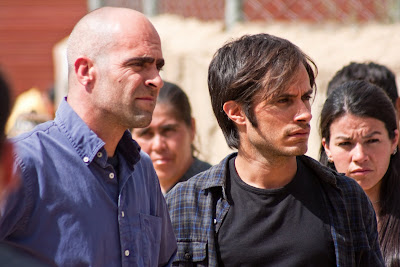 Luis Tosar as Costas the producer and Gael Garcia Bernal as Sebastian the director in EVEN THE RAIN (Tambien La Lluvia). (c) 2010 Moreno Films
This puts the film's director, Sebastian (Gael García Bernal), in a sticky situation. Does he learn from the history he is trying to film, or does he continue to make his dream project at all costs. As history is happening all around them, their film begins to mirror the real life events, and the irony of their own exploitation of the natives in their pursuit of telling the story of the Spanish conquest becomes increasingly apparent. Soon their story, their film, and the real life conflict become nearly indistinguishable from each other, giving them an experience they will never forget.

Director Icíar Bollaín deftly combines the three elements - the film crew's story, the film within the film, and the 2000 water war into a remarkable narrative, weaving the themes of exploitation and peaceful resistance together with elegance and grace. The characterizations are at times a bit obtuse, with Tosar's Costa veering a little to far into the "big bad producer" type, and Aduviri's saintly native teetering dangerously on cliche, but Bollaín manages to hold it all together with a sure and steady hand. 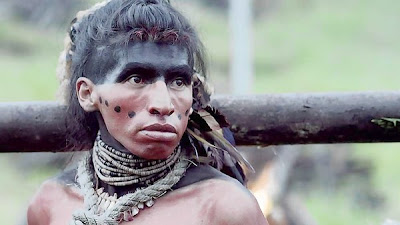 Daniel (Carlos Aduviri) joins the cast of the film within a film in EVEN THE RAIN (Tambien La Lluvia), but when he isn't acting, he is leading protests against the injustices of the government against the indigenous community. (c) 2010 Moreno
In fact the film within a film is so compelling in itself, it's hard not to want to see that film as well. In that way, Even the Rain almost serves as two films, with Bollaín creating sequences for Sebastian's Columbus film that offer a glimpse into just what the film could really be. But by weaving it into a real life modern conflict, Bollaín creates something deeper than a mere period piece, it's a universal story of injustice that doesn't need to hinge itself on self important or disingenuous proclamations, and indeed turns a withering eye on filmmakers who would do just that. The filmmakers in the film exploit the natives in ways similar to Columbus in their efforts to throw back the curtain on Spanish interference in South America. Bollaín isn't blind to the cinema's effects, and she certainly isn't blind to self-aggrandizing filmmakers who stand on the backs of others with pandering and hypocritical lessons that they miss themselves. Even the Rain is as much a critique on filmmakers who use artistic activism to pat themselves on the back as it is Spanish colonialism and capitalism run amok.

It is a dynamic and layered film, marked by fluid storytelling and timely themes that are presented without the kind of shameless pandering that so often accompany films about social activism. It is a fitting and moving testament to those who stand up against injustice and take their fate into their own hands, and at a time when the oppressed around the world are doing just that, Even the Rain feels as much a testament to them as it does to the people it depicts.