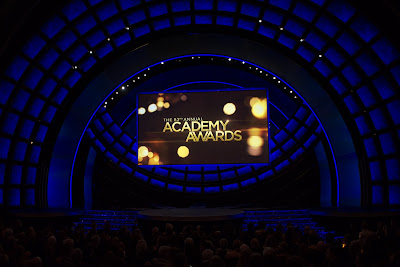 The set of the Academy Awards® during the live ABC Televison Network broadcast of the 83rd Annual Academy Awards® from the Kodak Theatre in Hollywood, CA Sunday, February 27, 2011.

I'll admit it - I love the Oscars. I always have, and I've always been one of the first to defend the Oscar telecast. Every year it seems that as soon as the show is over, all anyone can do is complain about how boring they thought the show was, how bad the host was, blah blah blah. It has always annoyed me. If the Oscars are so boring, why watch them? I love them! Even if the banter isn't the best, it's still the Academy Awards! I'm glued to my TV, waiting to see who's going to win, wondering if there will be any upsets, loving every minute.

With James Franco clearly high, and some of the most awkward interludes and podium banter I have ever seen, the 83rd Academy Awards burst my sunny little bubble. And while I still despise the annual tradition of piling on the Oscar ceremony, I can't help but wonder - "what were they thinking?" 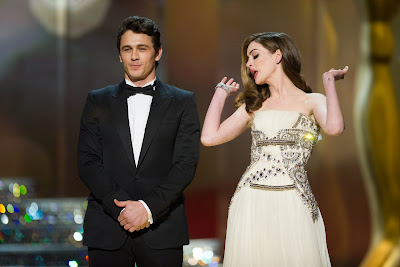 James Franco, Oscar®-nominee for Performance by an Actor in a Leading Role, and Anne Hathaway host the 83rd Annual Academy Awards® broadcast by the ABC Television Network from the Kodak Theatre in Hollywood, CA Sunday, February 27, 2011.
It was batty from the get-go. Hosts Franco and Anne Hathaway unsuccessfully attempted Billy Crystal's usual schtick of inserting themselves into the movies, and it only got weirder from there. Franco's baked indifference intensified as the night went on, and was not only rude, it was insulting. He acted like a goofy frat boy smirking his way through a college science presentation. Hathaway tried her best to make-up for her dead-weight co-host, but it was to no avail. The Oscars this year were an ill conceived, poorly directed drag.

Granted, some of the ideas were better than last year's crass Adam Shenkman "highlight the competition" mess, but overall there was a strange air of disorganization to the entire night, topped off with a truly bizarre performance of "Somewhere Over The Rainbow" by a bunch of Staten Island schoolkids. There were a few highlights - Kirk Douglas for one, Billy Crystal for another, who merely served to underscore just how badly the show needed someone like him. But overall, the show just didn't work. And never has this Oscar fan been so disappointed by the fiasco I saw unfold before my eyes.

Please learn from this mistake, AMPAS. I love you, I really do. But you need an intervention from yourselves.

And the winners were: