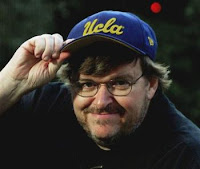 In a timely spark of controversy, the American polemicist and filmmaker, Michael Moore, is being investigated by the US Treasury for possible breaches of America's trade embargo with Cuba.

In February, Moore took a group of around 10 former rescue workers still suffering from breathing problems caused by the September 11 attacks for health treatment in Cuba — the idea being to expose America's healthcare system for his latest documentary SiCKO.

But the Associated Press reported today that the trip attracted the attention of the US Treasury's Department of Office of Foreign Assets Control, which monitors the trade embargo imposed on Cuba by John F. Kennedy in 1963. On May 2, Treasury officials wrote to Moore saying he had not received proper authorisation for the journey.

“This office has no record that a specific license was issued authorizing you to engage in travel-related transactions involving Cuba,” wrote Dale Thompson, chief of general investigations and field operations at OFAC, according to the AP. Mr Thompson said Moore was being investigated for civil violations of the embargo, which can carry fines of up to $55,000 per violation.

Honestly, who cares about the Cuba trade embargo anymore? If this proceeds it will be for political reasons only.
Email Post