Here is a first look at Heath Ledger as the Joker in The Dark Knight, Christopher Nolan's sequel to Batman Begins. 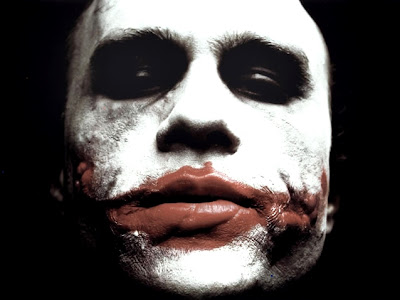 This is pretty creepy stuff. They're obviously going in a VERY different direction with it than Tim Burton did, but that was to be expected.

Thanks to the folks at Empire.com for sharing the pic, after fans revealed it as part of the Dark Knight promotional site, www.ibelieveinharveydenttoo.com (which itself is pretty damn creepy), which is meant to be a creation of the Joker himself (hint: highlight the page).
Email Post