Damien Chazelle's Babylon might be struggling to find an audience at the box office, but for my money you won't find a bolder, more uncompromising vision at the multiplex this year. The film's poor showing at the box office is certainly disappointing, but what at unabashed thrill it is to see a filmmaker like Chazelle take such a big chance and knock it out of the park so flawlessly. 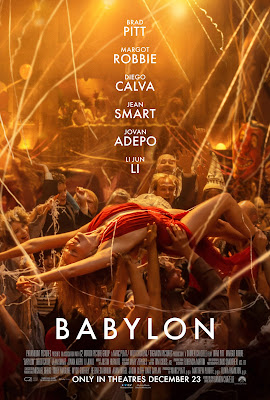 Set in the burgeoning movie Mecca of Hollywood in the 1920s and 30s, Babylon envisions the Hollywood as a lawless frontier where film sets are like war zones and sex and drugs are freely exchanged in a near constant orgy. It's the world of Kenneth Anger's seminal "Hollywood Babylon," a history book of questionable repute that nonetheless contains some of the most indelible stories, tall tales, and urban legends of early Hollywood. Into this world of sin and vice steps Manny Torres (Diego Calva), a Mexican immigrant who works his way up from manual labor on the studio lots to heading up production of Spanish language filmmaking, and Nellie LaRoy (Margot Robbie), an aspiring actress whose natural talent burns brightly and fades out just as quickly, much like onetime "It Girl" Clara Bow.

The film takes place mostly during the tumultuous transition from silents to sounds, when the entire process of filmmaking changed the landscape of Hollywood forever. Career were made and destroyed, and in Babylon, the act of creation is never far off from the act of destruction, and in some ways they are inexorably intertwined. Those ideas are constantly battling it out in Chazelle's slyly funny, visually clever "maelstrom of bad taste and magic," a film that feels like an evil mirror image of his Oscar-winning La La Land. If La La Land was the misty-eyed fantasy of Hollywood glamour, then Babylon is its seedy underbelly where flickering silver screen dreams go to die.

La La Land is, perhaps, a darker film than it gets credit for - it is, after all, about the sacrifices one makes for artistic success. But in Babylon, Chazelle ratchets that idea up several notches. Here, you don't just give up love, you give up your very soul. Stories of how Hollywood chews up and spits out talent are nothing new - A Star is Born, Singin' in the Rain, and Sunset Boulevard spring readily to mind. But like Singin' in the Rain's wicked stepsister (a connection it acknowledges in its exhilarating finale), Babylon takes a step back and wonders if there's even anything there worth saving.

This is virtuoso filmmaking - Chazelle sustains a dizzying level of energy that will be intoxicating to some and equally as off-putting to others. But that's the beauty of Babylon; it's a dazzling display of debauchery that feels like its in constant dialogue with Chazelle's previous work. Even Justin Hurwitz's score seems born out of his Oscar winning work for La La Land, as if he's playing a minor key inverse on its themes to explore the dark, seedy underbelly of a world we only thought we knew. In Babylon, film is a medium born of light and shadow built on ashes and ruined dreams that become something beautiful and immortal. That tension makes up the film's central conflict, daring to ask - is it all worth it?