In terms of bold cinematic visions playing at your local multiplex, it's difficult to fathom a bigger swing in recent memory than George Miller's Three Thousand Years of Longing. Even harder to fathom is how Miller convinced a major studio to fund what is essentially a big budget art film and give it a wide release, especially in these overly cautious times. 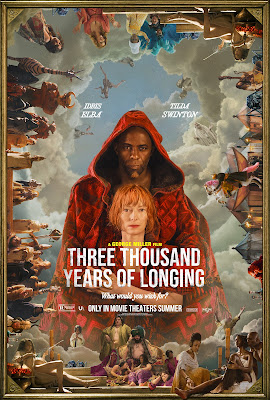 But whatever djinn Miller wished to to make this happen came through in a big way, because Three Thousand Years of Longing is a thing of rare beauty that isn't afraid to take chances, be earnest, be messy, and above all be creative. Based on A.S. Bryatt's "The Djinn in the Nightingale's Eye," the film tells the story of a narratologist named Alithea (Tilda Swinton) who unwittingly releases a djinn (Idris Elba) and is offered three wishes, which she must make in order to secure the djinn's freedom. Distrustful at first, fearing him to be a trickster, Alithea demands to learn more about his intentions. So the djinn recounts his long and tragic life, beginning with his imprisonment in the bottle 3,000 years earlier, and his ancient quest to fulfill the terms of his capture and release himself from his bonds. But as his tale unfolds, Alithea finds herself increasingly drawn to him and his brushes with ageless love, and finds herself longing for the same.

It's an interesting choice for Miller to frame much of the film as a story being told by one protagonist to another, with much of the action taking place in a fairly unassuming hotel room in Istanbul. Then again, it is a film about the power of storytelling (Alithea is a narratologist, after all), and great stories can transport us from a hotel room to the court of the Queen of Sheba, or from a movie theater into the astral realm of the djinn. The film is certainly more interesting when it leaves the hotel room - but that's part of the point. The djinn's stories are an escape, a gateway from Alithea's humdrum life to something spectacular, a pathway to other worlds she'd only ever dreamed of.

Miller isn't afraid to take the time to bask in the story's serenity, nor is he afraid to be earnest and big hearted. He's clearly having a blast playing with form as he conveys the story both through Alithea's writing and through the djinn's perspective, but at its core it's a very simple love story - and its sprawling millennia-spanning story really all comes down for a longing for human connection. Anchored by a sweeping romantic score by Tom Holkenborg that calls to mind the work of the legendary Ennio Morricone at times, Three Thousand Years of Longing feels like something of a throwback - boldly forward thinking in style and form yet unabashedly romantic, a dazzling playground of fantasy and storytelling that makes audacious choices that could have been disastrous in lesser hands, but nevertheless pay off handsomely thanks to Miller's uncompromising vision and the power of a great story well told.