On paper, a horror movie set in an LGBTQ conversion camp seems like a good idea - after all, their deep, intrinsic evil masked as caring and love is already terrifying. It's disappointing, then, that John Logan's They/Them squanders so much potential on a neutered narrative that plays like it was written by well-meaning but clueless allies rather than the work by queer artists that it actually is. 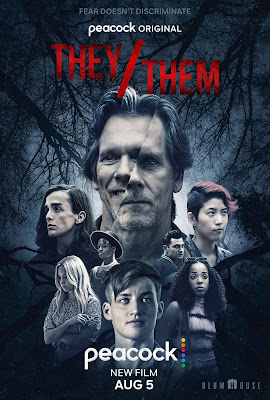 Logan is himself a gay man, and the cast of young queer people are terrific, but They/Them doesn't really seem to know what to do with them, or what it even is in the first place. Ostensibly a slasher film, They/Them is set at a remote conversion therapy camp in the middle of the woods whose counselors are being stalked by a masked killer. But killer seems to be an afterthought, disappearing from large swaths of the film and never making a particularly memorable impression. The horrors of the camp are meant to be the real scares, and Kevin Bacon does a fine job of balancing the warm and caring youth pastor facade with a barely hidden sense of menace, but the film's handling of the conversion tactics are both a bit too literal-minded and on the nose to really examine how insidious the whole problem is.

You see, all the counselors are queer converts themselves, playing on the trope that those who protest the loudest are often deepest in the closet. This does the film's ally credentials no favors, but it gets much worse, so for those who may be spoiler averse it may be best to stop reading now and come back later, because its impossible to discuss the film's shortcomings without addressing the final "twist." The killer, it turns out, is a former camper who has returned to seek vengeance against the counselors and rescue the current campers from their cruelty - a fact that They/Them attempts to put on the same moral plane as the abusive conversion tactics perpetuated by the counselors. The violence of the killer is shown as something to be risen above - rather than examining the trauma that led to it, the film judges them for killing their abusers and portrays them as a monster just as bad as they are.

It's a film that thinks its helping when it is very much not. Ignoring for a moment the fact that it forgets to be scary and barely uses the killer for anything interesting, it treats the campers' individual traumas as little more than sad backstories and never gives them a chance to grow or flourish or come into their own. Trans non-binary actor Theo Germaine as the heroic Jordan is really the standout here, and I wish their character had been given more time to really blossom, instead they're ultimately used as an example of how to be "one of the good ones." It's that assimilationist core that is most uncomfortable about They/Them - each queer character is fully good, each counselor is fully evil - and there's no room to explore the insidiousness of anti-queerness, especially when it presents itself in a kindhearted and innocuous package. And the queer characters aren't allowed to be messy or flawed - each held up as a kind of model queer in ways that ultimately undercut their humanity. Representation is important, but They/Them's version of representation is to paint its queer characters as an ideal rather than fully rounded people. It's a film that thinks it's being a strong ally but is really just perpetuating harmful tropes and engaging in victim-blaming nonsense, missing almost every opportunity to be something much more interesting.