Mervyn LeRoy's Madame Curie seems to check every box of an Academy friendly biopic. Major stars? Check - Greer Garson and Walter Pidgeon were hot off the Oscar-winning Mrs. Miniver (1942) and were in  especially great demand. Socially conscious topic? Check. Marie Curie was the first woman to win a Nobel prize in a male-dominated profession, whose discovery of radium was one of the major scientific breakthroughs of the 20th century. 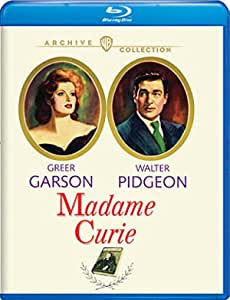 Films like this were all the rage in the 1930s and 1940s (The Great Ziegfeld, The Life of Emile Zola, The Story of Louis Pasteur, Sergeant York, The Pride of the Yankees, Yankee Doodle Dandy, the list goes on...). The Academy's love affair with biopics is well known and continues to this day, and while Madame Curie certainly has many of the tropes that are familiar to the genre, it's also not as dry as its subject matter might suggest.

The script may be a bit hackneyed and heavy on the exposition (it's certainly working overtime to make complex scientific ideas as easy to understand as possible), but thanks to a luminous performance by Garson in the title role and sharp direction by LeRoy (Gold Diggers of 1933, Little Caesar), Madame Curie positively hums at the excitement of exploring a new frontier. The film is first and foremost a love story between Marie and her husband Pierre (Pidgeon), but LeRoy wisely blends their burgeoning and deepening love into the wonder of scientific discovery.

It's an ingenious move, and the film is stronger because of it, transcending its rather staid biopic roots and often tingling with a kind of magic that sets it apart from its often dry biopic siblings. The film was ultimately nominated for seven Academy Awards, including Best Picture, Best Actress (Garson), and Best Actor (Pidgeon), ultimately losing the top Oscar tone other than Casablanca. While Madame Curie certainly hasn't endured the same way that film has, and it never hits the heights of Mrs. Miniver, it's certainly a fine studio production that is much better than its nearly non-existent reputation might suggest.