It's somehow fitting that the film that resurrected the box office after a year of being decimated by COVID-19, was the fourth installment of a franchise that had seemingly been written off. Warner Bros. Monsterverse, which began in 2014 with Gareth Edwards' Godzilla, eventually leading to Kong: Skull Island and Godzilla: King of the Monsters. The latter two were met with less enthusiastic reviews (although I remain a staunch defender of King of the Monsters) and ever decreasing box office returns, making Adam Wingard's Godzilla vs. Kong a likely culmination of Warner's attempt to take classic movie monsters like Godzilla, King Kong, Mothra, Rodan, and King Ghidorah into their own Marvel-style universe of clashing kaiju. 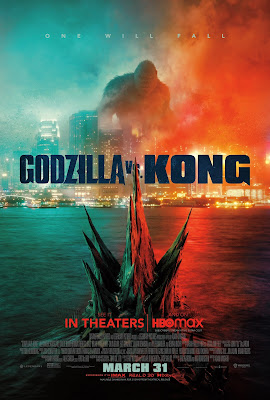 With the the vaccination rollout resulting in theaters reopening their doors, Godzilla vs. Kong had the fortune of being the first blockbuster release to open theatrically since the darkest days of the pandemic, revitalizing the box office in ways that Tenet couldn't quite manage last summer. And it's a good thing too because it's actually quite good, delivering every ounce of bonkers kaiju mayhem one could want in a film that its a giant lizard against a giant ape for a titanic battle royale in downtown Hong Kong. While some will dismiss it as silly, like Michael Dougherty's King of the Monsters before it, Godzilla vs. Kong actually seems to understand the DNA of Toho's Godzilla series. While the environmentalism at the heart of Toho's kaiju pictures, which were originally born out of the grief of the twin nuclear disasters of Hiroshima and Nagasaki, is less pronounced in their American counterparts, Godzilla vs. Kong's outrageous sci-fi plot and corporate villains driven by hubris and greed would feel comfortably at home in Toho's Heisei period of the late 80s and 90s.

It's hard to believe that in 2021 we're watching the continuation of cinematic ideas first conceived in 1933 and 1954, but it's gratifying to see these two venerable creatures still bringing in crowds. Here you've got King Kong wielding a battle axe facing down Godzilla and his nuclear breath, drenched in neon light and accompanied by a wailing synthetic score by Tom Holkenborg, surrounded by a human plot that involves an evil multinational corporation and a hollow earth (one of the most stunningly realized sequences in a major Hollywood blockbuster in years); Godzilla vs. Kong is outrageous, over the top, and wholly spectacular. It delivers on its promise to provide bone-crushing kaiju action, while simultaneously delivering one of the most shamelessly dorky, unapologetically weird studio entertainments in recent memory. Everything about it is big, bold, and  completely un-subtle, world's away from Edwards' grounded, terrifying take in Godzilla. But this is exactly the same direction the Toho films go - a serious reboot followed by increasingly outrageous sequels, and Warner's Monsterverse is following that model to a T. What it lacks in Godzilla's sense of scale and King of the Monsters' epic grandiosity, it makes up for in sheer guts, going all-in on the sci-fi oddities to deliver something strangely beautiful and consistently thrilling. Wingard's downtown showdown would feel right at home in films like 1991's Godzilla vs. King Ghidorah or 1995's Godzilla vs. Destoroyah, and features the return of a classic Godzilla villain that really takes the film to the next level. The movies are back, and with the film's strong box office success, even with its day and date streaming premiere on HBO Max, it's likely we haven't seen the last of Godzilla and King Kong.