Despite being one of the most critically acclaimed films of the 2020, there's something about Darius Marder's Sound of Metal that just doesn't quite sit right. It's certainly a unique spin on "triumph over adversity" tropes, in which its protagonist learns to stop seeing the "adversity" as a burden, but its point of view leaves much to be desired in its quest for acceptance. 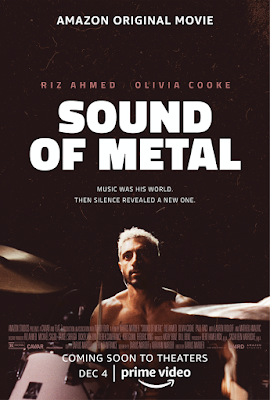 Riz Ahmed stars as Ruben, a heavy metal drummer who loses the majority of his hearing. Facing a life without music, Ruben desperately seeks any way of regaining his hearing so he can continue with his career. He ends up at a support group for deaf people lead by Joe (Paul Raci), where he becomes a mentor to deaf children and begins to learn how to accept the silence of his newfound life. But the siren song of the drums is too strong, and he embarks upon an experimental treatment in order to get his hearing back, no matter the cost.

Sound of Metal treats Ruben like an addict chasing the next high; except instead of drugs, the addiction is hearing. While there is certainly something refreshing about seeing a film in which a disability isn't seen as a negative, the film's quest to counteract ableism feels somewhat misguided. Ruben's decision to undergo surgery to regain his hearing is seen as a betrayal by his newfound friends in the support group, and the film judges him harshly for it. But of course he wants to hear - music is his life. Yet the film frames his decision as a relapse. It almost feels like a galaxy-brained, very online Twitter hot take, because while there's nothing wrong with accepting his disability, there's also nothing wrong with him wanting to return to his passion. The film's lack of ambiguity in this area is its biggest downfall, because it fails to give an emotional justification for its central thesis.

The film has received a lot of praise for its sound design, which is admittedly impressive in the way it reflects Ruben's own journey of self- acceptance. Yet the way in which in transitions from full audio, to muffled, to silent, and back again is inconsistently applied, which is symptomatic of the film's overall lack of point of view. It wants to be all things at once without ever fully committing to any of them. Its moments of silence or audio distortion offer tantalizing glimpses into what the film could have been, but it never embraces the silence in the same way it expects of its protagonist.

Had this simply been a film about a man learning to accept his newfound inability to hear, or the story of a man coming to terms with his drug  addiction, it would perhaps have been more interesting, but by combining the two, and equating them with each other, Sound of Metal severely stumbles, casting unnecessarily harsh judgment on a character who simply wants to play music again. Rather than simply letting go, the film seems to flagellate him for wanting to hear, and its grim tone and stylistic flourishes can't make up for a rather maudlin script. While the performances are certainly strong (especially by Paul Raci as Ruben's mentor), the film's muddled politics undercut its emotional impact by refusing to embrace the ambiguity of its protagonist's plight.