Based on J.D. Vance's popular 2016 memoir, Hillbilly Elegy has managed to become the latest lightning rod in the culture wars for its depiction of poverty in rural Appalachia. Embraced by conservatives as  a portrait of the "silent majority" left behind by the political establishment, the film has become something of a cause célèbre for Trump supporters and critics of "the left" (especially in Oscar blogger circles), who accuse the film's detractors of being "coastal elites" who look down their noses at the white rural working class. 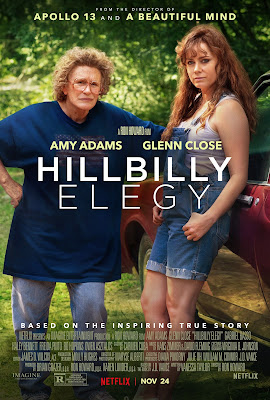 The problem is, of course, that none of that is true. Hillbilly Elegy is, if anything, a condescending piece of victim-blaming that positions its characters as casualties of their own lack of self-control, and that the only way to overcome their circumstances is to pull themselves up by their own bootstraps and get out in order to pursue a better life. Rural Appalachia is looked down upon as a dead-end, where "getting out" is in and of itself a success story.

The film follows Vance from childhood to college, raised in a hardscrabble existence by his indomitable grandmother (Glenn Close) while trying to help his often abusive mother (Amy Adams) overcome a crippling addiction to heroin. Through sheer force of will, his grandmother inspires him to work harder and overcome his circumstances, eventually leading him to Yale law school and a lucrative career at a prestigious law firm. It's a classic rags-to-riches story, that unfortunately comes at the expense of an entire region, throwing impoverished mountain folk under the bus as merely a circumstance that must be overcome in order to succeed in life.

Ultimately, it's the bootstrap myth disguised and an inspiring story of a boy from the hollers of Appalachia who makes good and goes to Yale. But its measure of success and self fulfillment is shallow and short-sighted, ignoring the systemic factors cause poverty and encourage addiction. That Hillbilly Elegy has been turned into a symbol of the culture war by conservatives betrays not only their ignorance of rural Appalachia, but their utter contempt for people living in poverty.

Although its biggest issues comes formats POV, with Vance positioning himself as the pure of heart hero who rises to the top in spite of his surroundings, the film itself looks and feels like a TV movie of the week from the 90s. Director Ron Howard was probably ill-suited to this material. Saddled with a weak screenplay that hangs its flashback structure on ham-fisted narration that often sounds like rejected ideas from treacly inspirational posters, the film sidelines its strongest performers and hangs the entire film on relative newcomers who just can't keep up. Close is acting the hell out of this, but the film itself is dull as dishwater, its over-the-top histrionics veering more into soap opera material that can't even be bothered to at least be interesting. As someone who actually lives in rural Appalachia and works directly with impoverished communities, Hillbilly Elegy often feels like a coastal fantasy of what "hillbillies" are really like. Close's performance is as close to authenticity as the film ever gets. And while Howard does his best to scrub the book's political posturing, it still reeks of the most insidious kind of classism, leaving behind a bland and lifeless film that has little to say. It's not just that the film doesn't seem to understand rural Appalachia, it's that it doesn't even seem to try, creating a self-satisfied piece of poverty porn that betrays the very people it claims to exalt.