The prospect of a second Borat film, coming some 14 years after the original film became a cultural touchstone back in 2006 (and long after catchphrases "Very Nice" and "My Wife" became passé), seemed dubious at best. After all, who in the year of our Lord 2020 could still be fooled by a Borat prank? The answer, unsurprisingly, turned out to be none other than Rudy Giuliani, making what once seemed like a bad idea into one of the year's most essential films. 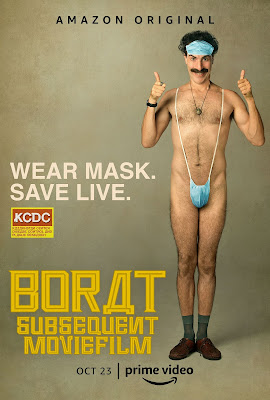 In the original Borat  Sacha Baron Cohen pulled the mask off of George W. Bush's America in gleefully subversive ways, holding a mirror up to the country and showing us the societal rot underneath the veneer of "compassion conservatism." In Donald Trump's America, the mask is completely gone - so what, if anything, is left to parody? Cohen's targets here are much more specific but also much bigger, with Borat targeting not only Giuliani (and humiliating him in grand fashion), but also Vice President Mike Pence. The plot finds Kazakh journalist Borat Sagdiyev (Cohen) returning to America to atone for shaming his country in his original film by presenting Pence with a celebrated monkey. Instead, Borat's daughter, Tutar (Maria Bakalova), stows away to join him on his quest, so Borat decides to give her to Pence as a gift instead.

Along the way, Borat encounters many every day Americans, and much as he does in the original film, entices them to agree and even build upon his openly racist views. When production is interrupted by the arrival of COVID-19, he bunks up with a couple of Trump supporters who espouse Q-anon conspiracy theories, attends Trump rallies and sings racist songs (much to the glee of the other attendees), and goes to a father/daughter dance where his sexually suggestive antics reveals some creepy behavior from the attending fathers. This time, however, Cohen achieves something almost more subversive than he did in the original film - he manages to find a glimmer of hope for our future amidst the grim surroundings. Rather than go along with his boorish antics, he encounters more people willing to push back against them. Whether it's the elderly Jewish women he encounters in a synagogue who provide him with a warm meal, or the kindly babysitter who watches after his daughter and gently pushes back against some of the ignorant anti-feminist views instilled by her father, or even the Republican women's meeting where the members extend warmth and compassion to the young immigrant girl - Borat Subsequent Moviefilm actually manages to display more than the worst of humanity.

Here, Cohen's targets are more powerful, and by actively seeking out bits of human kindness in the rubble of Trump's America, he actually manages to challenge Trump's hateful rhetoric not just by revealing how terrible it is (Trump has done that well enough on his own), he shows us that perhaps despite the ugliness Trump has brought out in us, that perhaps there is some good in us worth saving. That's what really sets Borat Subsequent Moviefilm away from Cohen's other, more nihilistic firebombs he's lobbed at America's hypocrisy - this film actually has a heart. His relationship with his daughter is actually quite sweet in its own way, and newcomer Maria Bakalova proves herself just as skilled as Cohen when it comes to enticing the powerful to make complete buffoons of themselves on camera. A new Borat film may have seemed like the last thing we needed in 2020, but Cohen proves that there was enough gas left in the tank to not only justify a second outing as the clueless Kazakh, but by tweaking the formula just enough, he's made it feel just as relevant and essential as it was in 2006. Not only is it deeply funny, it's also disarmingly moving - a damning yet hopeful portrait of America in 2020 that leaves us feeling that maybe, just maybe, there's a light at the end of the tunnel.