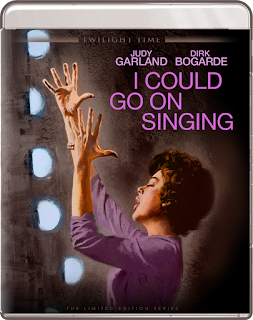 Is there any film whose title has taken on more inadvertent poignancy than I Could Go On Singing? As Judy Garland's final film (featuring a title tune by Harold Arlen and E.Y. "Yip" Harburg, the duo who also gave her her immortal signature tune - "Somewhere Over the Rainbow") I Could Go On Singing now stands as a bittersweet swansong for one of Hollywood's most beloved and tragic figures.

As Jenny Bowman, an American singer in London who reconnects with an old love and the son she left behind, who doesn't know she's his mother, Garland pours her soul into a role that could have very easily been a stand-in for Garland herself. Bowman's domineering spirit, her overwhelming need to be loved, her often complicated relationship with her own children, have haunting echoes into Garland's own life. The result is a testament to the enigma that was Judy Garland. And boy does she ever go out on a high note. After a confessional monologue that was mostly improvised (is it Bowman or Garland speaking?), she takes the stage to an adoring crowd, and belts out the title song, "I Could Go On Singing." She didn't, as it turns out. But she left us with a final statement that is perhaps one of cinema's great farewells. 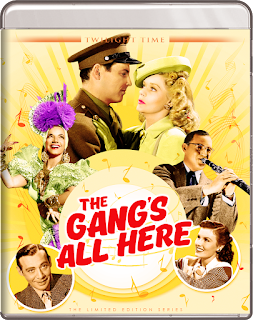 Busby Berkeley's first color film is everything you would expect it to be - a vibrant, Technicolor fantasia that makes every use out of the swirling, twirling visuals to create bursts of stunning, colorful magic.

Released in 1943 at the height of WWII, The Gang's All Here was Berkeley's antidote to the the growing darkness of wartime. Just as his lavish musicals of the 1930s lifted America's spirits during the Great Depression, The Gang's All Here took a look at soldiers and the women who loved them with toe-tapping musical glee. As is typical with Berkeley, plot is almost beside the point, the central romantic triangle feeling almost like an afterthought to the spectacularly staged musical numbers. I challenge anyone to find a musical number as visually stunning (or as blatantly suggestive) as the dazzling centerpiece, "The Lady in the Tutti-Frutti Hat," which features lines of chorus girls dancing with giant, phallic bananas. It's a wild burst of colorful energy that is pure Berkeley, and one of his most wildly surreal set pieces. While the film doesn't quite match up to his legendary run of the 1930s, it's hard to ignore the infectious energy of this late period triumph. 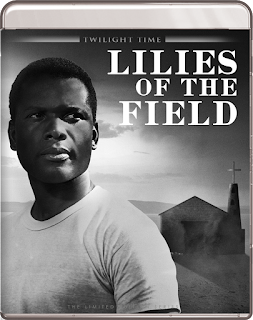 Mostly remembered now as the film that made Sidney Poitier the first African American Best Actor Oscar winner, Lilies of the Field is the heartwarming story of a drifter named Homer Smith who meets a group of German nuns in the countryside who escaped East Berlin and came to America. What begins as a pit stop for water becomes something much more, as the nuns decide that he has been sent by God to finish their rural chapel, and enlist the reluctant drifter to stay and help.

The film's original advertising proclaimed Lilies of the Field to be "perhaps the most extraordinary story of courage, conflict, and devotion ever filmed." That may have oversold it a little, but there's something quietly endearing about this little film that goes beyond Poitier's powerhouse performance. He's certainly the anchor of the film, but it is his tempestuous relationship with the nuns that give the film its emotional center. Occasionally adversarial, occasionally friendly, always rooted in mutual respect, Homer and the nuns represent a kind of culture clash that, in the heat of the Civil Rights movement no less, has more to do with faith than race. There's a kind of Western vibe at work here - Poitier the rootless wanderer who drifts into town at just the right time, only to ride off into the sunset when his task is through. His task, it turns out is far more than just building a chapel, it's building a community, a rock on which to build a church. It's a beautifully understated work, built on the dignity of Poitier's warm gravitas, and told with a gentle and disarmingly moving confidence. It may be remembered mostly for Poitier's historic Academy Award, but beyond its trivia night significance, it's one of the era's unheralded gems. 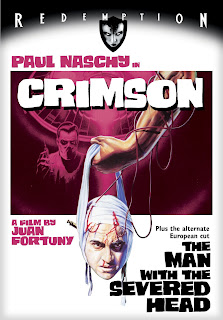 Also known as Crimson in its edited American release, Juan Fortuny's Euro-trash horror re-imagining of Frankenstein is borderline unwatchable. Not even one of those "so bad its good" type of movies, The Man with the Severed Head is just plain bad - a strangely uneventful film about a mad doctor who performs a head transplant on a dying crook, replacing his head with that of a psychopath, turning him from a petty criminal into a murderous maniac who isn't in control of his own actions.

The French version is slightly longer, with more nudity and gore, but that still doesn't turn this wannabe exploitation movie into anything worth watching. It's a dramatically inert, awkwardly paced work that, like most exploitation movies of its era, never delivers on the lurid promise of its title, and doesn't even have the good taste to be tasteless enough to be interesting. 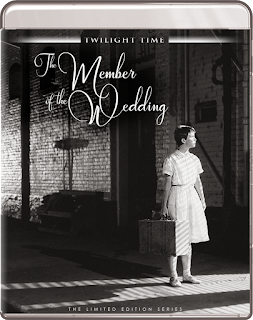 The same year that he directed the legendary western, High Noon, Fred Zinnemann also directed this lyrical and understated adaption of Carson McCuller's play, The Member of the Wedding. About half the length of the play's gargantuan 3- hour running time, Zinnemann's film is more light on its feet (if less focused on recital issues), a touching an brilliantly acted piece of southern gothic that examines the awakening of a 12 year old girl, whose older brother is getting married and leaving home. Mad with jealously, confusion, and adolescent romanticism, young Frankie plans to run away with them, baring her soul to her African American housekeeper, and the young boy who lives next door.

Zinnemann displays a similar restraint as he did in the same year's more famous High Noon, yet here it's in service of something much more personal. Zinnemann replaces the American iconography of High Noon with the politics of gender and race, rendered indelibly by the masterful performances of the play's original Broadway cast - Julie Harris, Ethel Waters, and young Brandon de Wilde, who just the next year would enter into Western iconography himself by crying "come back, Shane!" While the film does not go as deep as the play on which it is based, it allows these fine actors to carry the stellar screenplay with great warmth and heart. The film often betrays its stage roots, with its single setting and long stretches of dialogue, but Zinnemann wisely steps back and allows the actors to carry it. And boy are we ever on good hands. 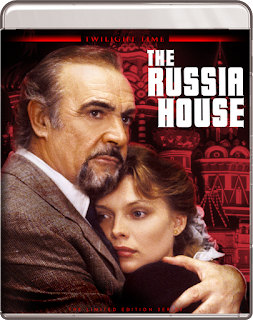 Tom Stoppard penned the screenplay (adapted from a novel by John le Carre) for this lovely, subdued spy drama about a boozed-up British ex-pat living in Russia (Sean Connery, in one of his most delicate performances), who is recruited by British intelligence and the CIA after he is given a secret manuscript by a beautiful and mysterious Russian citizen (Michelle Pfeiffer). THE RUSSIA HOUSE eschews the chase scenes and shoot-outs usually associated with espionage thrillers for dazzling wordplay, character-driven intrigue, and a strong emotional core, as the newly minted spy Connery begins to fall in love with the woman he's supposed to be spying on.

It's also a striking political thriller, a film whose plot revolves around a manuscript that reveals that the Russians are completely unable to engage in war, and that the Americans are engaged in an arms race essentially with themselves - a fact the CIA means to cover-up. Released in 1990, just after the fall of the Berlin wall, The Russia House was one of the first American films to be shot in post-Soviet Russia. It took a daring, if understated, view of a world that was no longer black and white, but whose shades of gray were reflected in the hazy drabness of early 90s Moscow, and set to the aching noir-ish tones of Jerry Goldsmith's haunting score.