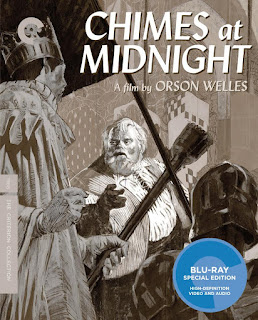 Orson Welles had a lifelong fascination with Shakespeare that culminated in 1965's Chimes at Midnight, which examined the life and times the Bard's lovable, oafish drunk, John Falstaff. Historically a comic supporting character, Falstaff is here reimagined as a tragic figure, a lonely, aging playboy whose love of wine, women, and song has left his soul empty.

Welles combined "Richard II," "Henry IV," "Henry V," and "The Merry Wives of Windsor," to examine Falstaff not as a supporting character, but as the star of his own story, one in which he faces both mortality and his own irrelevance. Still a subject of ridicule (he wanders around a battle, nearly blind, in his comically oversized armor), Falstaff's antics often take on a strange sort of melancholy. In Chimes at Midnight, Falstaff is no mere clown, he's a man whose life of excess has finally caught up with him. 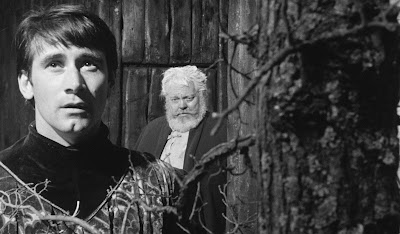 One could draw parallels between Falstaff and Welles himself (who delivers one of his most towering performances here). Welles was nearing the end of his career, and had never truly been able to escape the shadow of his first film, the legendary Citizen Kane. Chimes at Midnight came after a period of self-imposed exile for Welles, and was meant to be something of a comeback. While it has been largely forgotten in the years after its release, it now stands as a testament to the man's immeasurable talent, reaching back to the experimental days of his youth. The centerpiece battle sequence feels like something out of Eisenstein, with its kinetic, Soviet-style editing. One can feel Welles' energy and passion, but there is a sense of regret that hangs over Chimes at Midnight that is impossible to ignore, as if Falstaff has become a metaphor for Welles himself - larger than life, but facing the uncertainty of a future in which he may no longer have a place.


On Blu-Ray and DVD from The Criterion Collection on August 30.
Email Post
Labels: Orson Welles