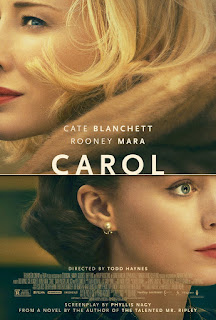 It's hard to do justice to the exquisite longing that courses through the veins of Todd Haynes' Carol. Haynes makes films that must be felt on a gut level, the kinds of films that causes chills that start in your very core and radiate out to the tips of your fingers. As he did in Far From Heaven, Haynes takes the staid structures of the 1950s "women's pictures" and explores the unspoken emotional truths coursing beneath the surface. While Haynes isn't recreating the work of Douglas Sirk here, that same DNA runs deep in Carol, as he explores the forbidden Eisenhower-era romance between an upper middle class housewife and a younger shop clerk.

Carol Aird (Cate Blanchett) is in the process of going through a divorce from her husband, Harge (Kyle Chandler). Carol, it seems has always preferred the company of women to men, most notably her daughter's godmother, Abby (Sarah Paulson); and despite her husband's instance on making things work, she can't change who she is or what she wants. What once seemed to be the picture-perfect 1950s family has been torn apart, leaving their young daughter, Rindy, in the middle. 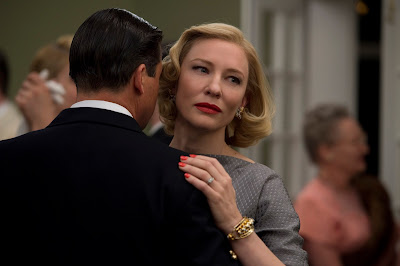 That is when Carol meets Therese (Rooney Mara), a shy young shop clerk who dreams of being a photographer. After Carol accidentally leaves her gloves behind at the store, Therese returns them, and Carol asks her to dinner to thank her. It is the beginning of a friendship that soon turns into something more. There is never an "aha" moment of realization for Therese. Clearly Carol is a woman more confident in her sexuality, but Therese is young and still trying to understand herself. She's had relationships with men, but couldn't quite understand why they were never fulfilling. Yet there is something about her relationship with Carol that just feels natural, and Haynes creates an mesmerizing drama out of watching it evolve. He doesn't hit us over the head with one dramatic moment or spend any time with Therese struggling with her sexuality, he allows their friendship to become a romance before either of them really know it. When the tension finally breaks, its feels inevitable, natural, almost like fate.

Like the "women's pictures" that were so popular in the 1950s, domestic love stories with female-centric stories, Haynes' films are often filled with surface pleasures - immaculate period design, a haunting, Philip Glass-like score by Carter Burwell; but like Sirk before him, Haynes always takes it one step further, examining the deeper emotions emotions beneath the seemingly flawless veneer. There is always something more going on in each scene than meets the eye. Like its two characters, living out a hidden romance in plain sight of a repressive society, Carol keeps its emotions boiling beneath the surface. More is said in what the characters don't say than what they are able to articulate themselves. That is the kind of directorial restraint that defines Carol. It walks a delicate tightrope of emotions, using its sumptuous design as a thematic facade covering up the inner turmoil beneath. 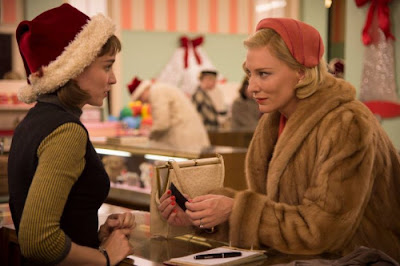 Carol and Therese come from two different worlds, yet find each other in a society that denies their right to exist. Yet in 2015, a year that gave same-sex couples in America the right to get married nationwide, Carol doesn't feel in any way radical or envelope-pushing. It just feels human. We may be in a time when "morality clauses" were still grounds for taking a mother's children away from her, but Haynes has moved queer cinema out of the closet and into the mainstream in such a way that one has become almost indistinguishable from the other. That's whats so fascinating about his chosen aesthetic here. "Women's pictures" were often the most squeaky clean of genres, little more than glorified soap operas (subverted at times by directors like Sirk), yet Haynes uses them as a vehicle to tell a story that could have never been told then, and it feels almost as if it stepped out of the mists of time, a lost lesbian romance from the 50s finally able to see the light of day.

At the film's center are two luminous performances by two consummate actresses. Blanchett and Mara are both absolute perfection, channeling the deep, repressed emotion of two women whose true feelings can't be adequately expressed in the language of the time. They make us feel every moment in a way that feels strangely personal. The same could be said of the entire film. It's a beautiful work, but more than that, it's a deeply powerful one. Haynes so expertly subverts the formulas in which he dabbles, using them to his advantage to tell a story that runs beneath the surfaces he creates. You don't just watch his films, you feel them on a completely different level. He says so much in the longing glances, the subtle gestures, each contained within an impeccably composed frame. Carol is a sublime love story, one that brims with the fiery passion of first love bulging at the seams of its societal prison. It is a major work by a major filmmaker, working at a level of narrative grace and elegance that is almost unmatched in contemporary cinema. In short - Carol is a masterpiece.