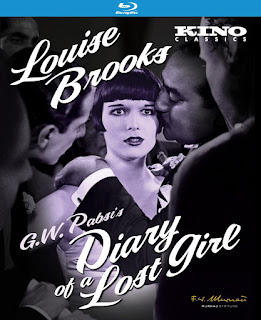 Has there ever been a movie star with the same luminosity as Louise Brooks? Her darkly seductive features make up the expressive core of G.W. Pabst's 1929 silent masterpiece, Diary of a Lost Girl, a tragic tale of a young woman who is sent off to boarding school after becoming pregnant out of wedlock. After escaping boarding school to find her child, she ends up working as a high class prostitute before returning to upend the society that shunned her.

Brooks is perhaps best known for her role in Pabst's previous film, Pandora's Box, but her work here is somehow more subtle and more heartbreaking. Brooks plays the vamp well, but here she nails the innocence of young Thymian, making her fall from grace all the more tragic. Even after she becomes a fallen woman, Brooks never really plays the sexpot, instead, she plays the heartbreak at her core. Pabst isn't exploiting Brooks for her looks (although promotional materials from the time reveal Brooks with her nipples peeking out from her dress), he's exploring the pain and heartbreak beneath the surface of an exploited woman. 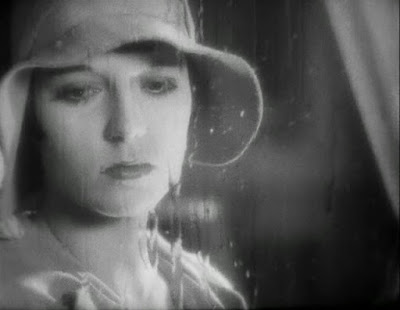 One could even make an argument that Pabst was an early feminist filmmaker, critiquing the patriarchal world that forced Thymian into this life - done wrong by the men in her life and forced into a life of sexual slavery. Eventually, she returns to upend the very society that nearly destroyed her, and she does so under her own power. Thymian's agency is remarkable, especially for 1959, and it's a curious thing that this film is 86 years old and still feels lightyears ahead of many modern films in terms of its portrayal of women.

One of the things that makes the film so striking today is just how startlingly contemporary it feels. Pabst's fluid camera movements, the lingering close-ups, the masterful compositions, it's a gorgeous film. Based on the novel by Margarete Böhme, the DNA of Diary of a Lost Girl is very much rooted in the theatrical melodramas of the 19th century, where tragedy and misfortune happen so frequently that it threatens to become laughable. However, Pabst handles the material with such a gentle hand that it transcends its pulpy source material with a kind of delicate lyricism. He isn't content in allowing Thymian to be a mere damsel in distress, waiting on a man to come rescue her. No, she rescues herself, and takes on the establishment all by herself.

That's what sets it apart from many other films of its day (and today, for that matter). This is a film about a strong woman learning, at long last, that she doesn't need anyone to take care of her, all she needed was the confidence to do it herself.  It's incredible, really, that it came out in 1929, but here it is. Pabst knew how to use Brooks better than anyone, and she was never more breathtaking than she was here. There's so much going on in her performance, there's a vulnerability, a vivaciousness, a sexiness to her that seems to reach through the ages. Even amid the scratches and grain of old film stock (lovingly cleaned up by Kino Lorber for this Blu-Ray release), Brooks' performances shines. Heavily censored upon its original release, Diary of a Lost Girl has been restored to its original glory as intended by Pabst. It is a masterpiece of the silent era, and a showcase for one of the silver screen's greatest stars. Yet it is also a reminder that great roles for women do exist. And it makes one wonder, if they could do this in 1929, why can't they do it now?