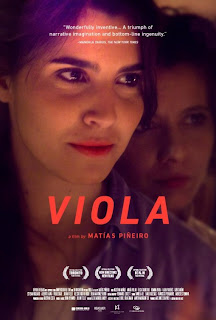 In Matías Piñeiro's lovely, enigmatic Viola, the art in focus is the work of William Shakespeare, whose comedy, Twelfth Night, is being performed by a group of actresses in front of a small audience. The size of the space makes for an intimate evening of theatre, so much so that the actresses can very easily see a peculiar audience member near the stage staring intently at one of them in particular.

The man in question turns out to be the boyfriend of Viola (which, incidentally, is the name of the lead character from Twelfth Night), the proprietor of a black market DVD burning business. Plot details are beside the point here because Piñeiro isn't concerned so much with a typical narrative. He's here to explore an idea rather than a story.

Throughout Viola, Piñeiro picks up tiny story threads, dropping some, following others, feeling its way through a world unwittingly connected by Shakespeare. It's like a less obvious, more subtle version of a Paul Haggis film, where seemingly unconnected characters are joined by some unseen force, except here the connections are much more difficult to spot. Sometimes it's just the shadow of an idea, a kernel of a Shakespearean theme that takes hold in unexpected ways through the characters' own philosophical musings. The final scene is perhaps one of the most thrilling of the year, and it is built completely on idea put forth by one of Viola's friends to test whether or not her relationship is still fresh. The suspense of waiting for the key moment becomes one of the film's defining moments, and the denouement manages to be both joyous and heartbreaking. Even at only an hour long, Viola manages to pack an unexpected emotional wallop. 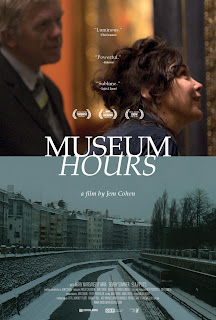 Jem Cohen's Museum Hours is less outwardly emotional, but perhaps even more thoughtful. There is quite a bit to chew on in its hour and a half running time, much of it spent in quiet reflection at the Kunsthistorisches Art Museum in Vienna, Austria.

Born out of Cohen's love of museums, the film centers around a guard who spends his days admiring the paintings and observing the patrons who come and go on a daily basis. His life is filled with art, day in and day out, but it isn't until he meets an eager foreigner that he begins to see his world through the eyes of someone discovering it for the first time.

But this seemingly romantic non-romance isn't really the focus here. As a tour guide explains of the art of Pieter Bruegel (whose work also inspired Lech Majewski's lovely film, The Mill and the Cross, just last year) to a know-it-all tourist - sometimes what seems to be the center of the work sometimes isn't meant to be the focus at all.

Such is the case with Museum Hours. It's more about the art, really, than the people. But what museum isn't? It is the work that has survived, and given pleasure to countless generations, and you can feel Cohen's love for it radiating off the screen. It's a mesmerizing meditation on the nature of art and the transience of human existence, as patrons come and go, the art remains - timeless, unchanging. Is art merely the trash of another time like our own? Will the discarded remnants of modern life one day be held in such high regard by the people of an unknown future? Life in transition slowly moving toward antiquity marks the core of Cohen's sublime and quietly engrossing exploration of the power of art to bind people together across the ages.

The same could be said of Viola as well - art is a universal constant, be it on stage or on a canvas or, in this case, on celluloid. The two films make a great double feature, two riffs on two strikingly similarly yet differently realized themes, once again demonstrating the great power of art to say things in a unique and memorable way while uniting human experience into something tangible Such is the hallmark of great filmmaking.

Both films are now playing in select theaters from The Cinema Guild.
Email Post