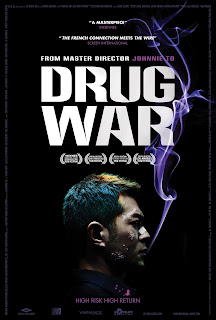 "For whoever wills to save his soul, destroys it; but whoever will give up his soul for my sake, this one saves it.” - Luke 9:24

Such is the case in Johnnie To's explosive new film, Drug War, a smoldering, exhilarating work of top notch action that transcends its genre roots and achieves something much greater.

As Steven Soderbergh's Traffic once reminded us, no one gets away clean, and in Drug War that rings even more true. The film follows a drug dealer who, in order to escape China's mandatory death penalty for drug dealers, strikes a deal with the police to become a mole and help expose a powerful crime boss who is holding Hong Kong in his grip. 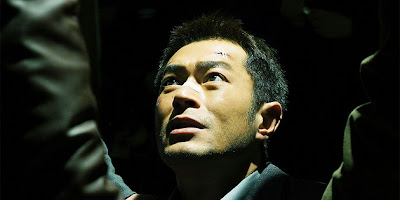 Honor versus dishonor. Law versus lawlessness. To's flawless direction explores a world  colored in shades of gray that everyone involved in sees in black and white. Drug War is essentially a morality tale, but it's also a crackerjack action film, perhaps one of the great action films of the new century. The blood soaked finale is absolutely masterful filmmaking, but To especially excels in the film's quieter moments. Each moment means something, each cut, each shot - To crafts his film with great attention to detail so that nothing is wasted. It's economical filmmaking, but also brilliant filmmaking. To is a born storyteller, and his work here is nothing short of astonishing. Drug War is a great film - a film that takes a deeply complex subject and turns it into compelling drama without sacrificing its thematic integrity.