To all my North Carolina readers - in celebration of its 1 year anniversary, the a/perture Cinema in downtown Winston-Salem will present Olivier Assayas' Carlos in its complete, 5 1/2 hour form on Saturday, January 8 at 12:30 PM, and Sunday, January 9 at 5 PM. 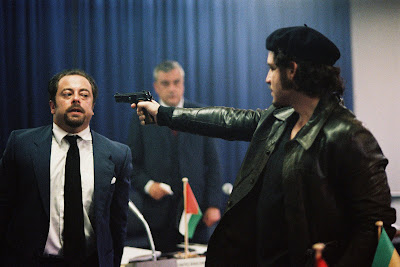 The film, which was #3 on my top ten of 2010, chronicles the life of Ilich Ramirez Sanchez, who was known to the world in the 1970s as the infamous terrorist, Carlos. In my top ten write-up in The Dispatch I said:

"It is an epic in the truest sense of the word, from its decade and continent -spanning scope to its nearly 5 1/2 hour length. But despite its massive running time, Assayas keeps it light on its feet, maintaining its pacing and keeping it effortlessly engaging. A bold and meticulous portrait of a complex man, from his glory days as a proud lefitst revolutionary to a man on the run in his twilight years searching for relevancy in a changed, post-Cold War world, 'Carlos' is the kind of fearless filmmaking Hollywood has forgotten how to do."