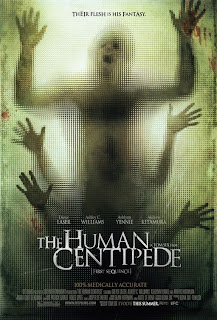 Horror films have have always tried to outdo each other when it comes to shock value. The films that were shocking 10 or 20 years ago seem tame in comparison as filmmakers continually up the ante. Whereas Alfred Hitchcock's Psycho was once considered envelope pushing, it seems relatively subdued by today's standards (even if it still retains its psychological power).

Now, in 2010, less than a year after the release of Lars von Trier's controversially graphic Antichrist, comes Tom Six's The Human Centipede (First Sequence), a film centered around an outrageously disgusting premise designed to provoke and sicken with equal measure. It's been causing quite a stir among horror fanatics and gore hounds, looking to become a midnight movie sensation and a kind of "I dare you to sit through this" phenomenon that challenges even the strongest stomachs.

The problem is, it's not really as bold as it thinks it is. 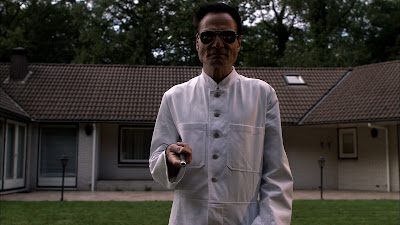 Dieter Laser as Dr. Heiter in THE HUMAN CENTIPEDE directed by Tom Six
© 2009 sixentertainment. An IFC Films Release.
The premise is undeniably disturbing. It centers around a crazed German doctor named Dr. Heiter (Dieter Laser), once the world's foremost surgeon when it came to separating conjoined twins, who has lost his mind and is now experimenting with reversing the procedure and joining things together. His first experiment, with three rottweilers, which he calls his "beloved three hound," didn't last, and Heiter has his eyes set on a much bigger project. So he kidnaps three tourists, two American girls who are lost after getting a flat tire on a lonely country road, and a Japanese man who speaks no English, and performs a gruesome procedure, linking them from anus to mouth, essentially creating a human centipede with one long gastric system.

If it sounds hard to stomach, it is. Six created the idea along with a real life surgeon, taking painstaking steps to ensure that his surgically altered monstrosity is completely medically accurate. The human centipede is a horrific creation, straight out of a Nazi scientist nightmare, and Six is successful at creating an atmosphere of intense dread. 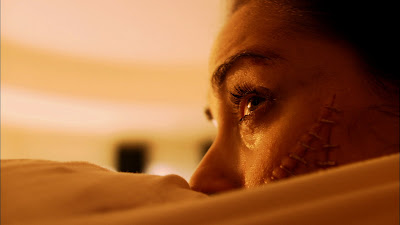 Ashley C. Williams as Lindsay in THE HUMAN CENTIPEDE directed by Tom Six
© 2009 sixentertainment. An IFC Films Release.
Where The Human Centipede falls short, however, is in expanding upon its ghoulish premise. It's an undeniably creative and twisted idea, unique in its ghastly sadism, but it never really expands beyond that. This is the kind of film that attracts attention through its outlandish nature alone, but never provides anything beyond mere shock value. Its young victims are little more than typical, vapid, horror movie gore fodder, and the acting reflects that. Dieter Laser as Dr. Heiter is wonderfully creepy (and is, in many ways, a perfect horror movie villain), but his co-stars fail to connect us to their characters in any way. Once Heiter makes his horrific creation, the film really has nowhere to go, and even a last ditch attempt at something deeper as a main character equates his failed life to that of an insect, seems like too little, too late.

One wonders where Six will go from here in his planned sequel, The Human Centipede II (Full Sequence), which will feature a 12 person centipede. Perhaps it will give him a chance to expand upon the idea rather than rely on its squirm inducing concept to carry the entire film. Still, The Human Centipede is undoubtedly a film that will spark a lot of discussion and debate in the short term, especially amongst horror aficionados, but, never as graphic as one would expect or as inventive as one would hope, there's very little here worth recommending, even to the morbidly curious.

Derek Armstrong said…
I actually liked the fact that it wasn't as graphic as I thought it would be. That told me that Six didn't use gore as a crutch. The points of junction between each link in the chain are chastely hidden by bandages, for example -- which could be, of course, because it's cheaper than to try to show the skin-to-skin connection through FX. But I chose to applaud Six for realizing that the actual physical shock of the creation wasn't the only trick up his sleeve -- imagining what the characters are going through is at least as important an element of this film.
4:43 PM

Anonymous said…
I watched this film a couple days ago because I am a horror film lover. I must say that I thought it would be much worse than it really was. Once I got past the idea of the mouth to anus connection I was fine. I think this film is more psychological horror than anything. It was more so the images and thoughts that went through my head that made me sick...
2:47 PM