"Last Tango in Paris:" A Retrospective

Ticket touts did a roaring trade. Some critics responded in rhapsodic fashion. Others professed themselves disgusted. There may not have been riots (as there were with The Rite of Spring), but the Village Voice carried talk of walkouts by board members and "vomiting by well-dressed wives".

That was only the beginning. Over the next year or so, as the film was released around the world, it provoked court cases and censorship rows while turning into a massive box-office hit. The Brits especially relished the scandal that surrounded what the News of the World called "the sexiest, frankest picture ever made... the sex film to end all sex films". Meanwhile, Mary Whitehouse, the campaigner for morality and decency, was as outraged as everyone expected her to be when the British Board of Film Classification gave the film an "X" certificate after cutting a mere 10 seconds of the film. "Art? No, it's a licence to degrade," complained the Labour MP Maurice Edelman.

The distributors, United Artists, were even sued by a 70-year-old former Salvation Army social worker called Edward Shackleton for breaching the Obscene Publications Act. The same debates about art, obscenity and freedom of expression that had raged during the Lady Chatterley's Lover trial, in 1960, raged all over again. 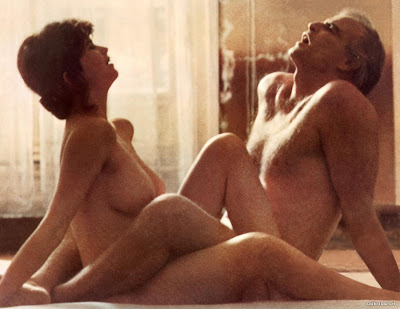 I wrote a paper on this for my Advanced Film Studies class I took last year. Here's a excerpt:

Whether or not Last Tango in Paris “altered the face of an art form” as film critic Pauline Kael once claimed is up for debate (I am inclined to say that it didn’t). I still, however, believe that the film is a masterpiece…it just wasn’t the beginning of the cinematic revolution it was once thought to be.

I fail to see how it is exploitive, as Monaco seems to think it is. To quote Molly Haskell, "Our rearguard fantasies of rape, sadism, submission, liberation and anonymous sex are as important a key to our emancipation, our self-understanding, as our more advanced and admirable efforts at self-definition." What Bertolucci is doing here isn’t exploiting sex, he is finding the emotional truth beneath the surface. The American Heritage Dictionary defines pornography as “sexually explicit pictures, writing, or other material whose primary purpose is to cause sexual arousal.” This is not the point of Last Tango. Bertolucci did not make this film for the sole purpose of sexual arousal, but to explore the emotional intricacies of sexuality. To quote my own review of the film, “What is love? What is lust? What connects one person to another? Bertolucci explores these questions with an engrossing, mature style. His assured direction is just as much responsible for the quality of the film as the fantastic performances, especially by Brando, who bares his soul in one of the most astonishingly naturalistic performances ever captured on film. His portrait of a wounded man looking for a random connection without commitment is searing.”

I still stand by my assertion that it is one of the best films ever made, and that it opened the door for freedom of sexual expression in cinema, I just don't think its impact was quite as huge and all-reaching as Kael once proclaimed.

I do agree, however, with the final assesment in Geoffrey Macnab's article:

But Last Tango would struggle to find a mass audience today. After all, this is an uncompromising art-house film from a revered European auteur. The idea that such a film could play for years on end in London cinemas is nowadays unthinkable. Nor is there much sense that audiences have the energy to get as worked up as they did in 1972, when even the film's detractors at least had passionate opinions about it.

How sad and yet how true. Audiences would stay away from Last Tango in droves today. What a sad comment on just how far our film culture has declined since the 1970s.
Email Post