Dreaming about being alone or abandoned, especially in the dark, is the kind of childhood nightmare that feels almost universal. It's a dream so many of us have had that I'm surprised it's taken this long for a filmmaker to capitalize on it in such a direct way. 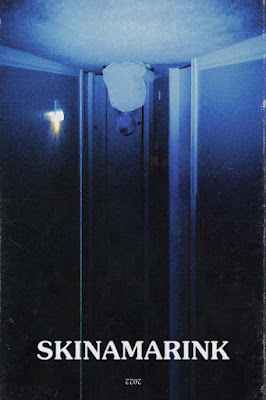 Kyle Edward Ball's Skinamarink does just that. After going viral following a festival premiere late last year, the film is now enjoying a wide theatrical release from IFC Midnight and Shudder, before making its debut on the streaming platform next month. It's rare to see such an experimental film become such a word-of-mouth success, and Skinamarink manages to live up to the hype while leaving the distinct feeling that it could have been a much better film than it is.

What it gets right is the way in which so indelibly conveys the feeling of a child's nightmare. The film centers around two young children whose dad disappears, along with all the doors and windows in the house, leaving them alone with their mysterious mother and an unknown entity that invites them to do increasingly disturbing acts of violence. The children and the adults are rarely shown as the analog camera focuses mainly on objects in the house, that suddenly take on a sinister aura in the darkness. Ball lingers on objects that disappear, suddenly relocate to the ceiling, or change almost imperceptibly. There isn't a traditional plot here, Skinamarink skirts around a kind of surrealist aesthetic that intentionally defies logic in favor of a dreamlike quality that quickly creeps under the skin. It rarely releases the built up tension but when it does it's some of the most wholly unnerving horror cinema in recent memory - and it comes from the most seemingly mundane objects and moments.

One can't help but feel, however, that those moments would have been far more effective if a good chunk of the film didn't feel like it was meandering aimlessly. Ball is careful in the way he sets up his scares, but Skinamarink feels like a legendary 70 minute film that has been stretched out to 100 minutes. It moves in fits and starts in ways that are as enthralling as they are tedious, often going nowhere for minutes on end, which can wear thin because many of these aimless moments add little to the already unsettling atmosphere - often undercutting its momentum rather than enhancing it. But when it works, Skinamarink is a holy terror of a film, a nightmarish journey into the pure, abject horror of a child's fears. It becomes a more impressive achievement the more it sets, because this is the kind of film that lingers with you, haunting the corners of your imagination long after the lights come up. It's that abstract evocation of fear that elevates Skinamarink, and despite its penchant for wearing out its welcome, it's a strong debut for Ball, and has all the makings of a bonafide phenomenon. Best not to watch it alone.