There was a time in the not so distant past when the arrival of another Michael Bay action spectacle would have probably been greeted with a collective shrug from critics and cinephiles. But in today's landscape of cookie-cutter, personality-free tentpoles, Bay's voice feels somehow reinvigorating, a bracing reminder of what a well-oiled and distinctive cinematic thrill machine can truly accomplish. 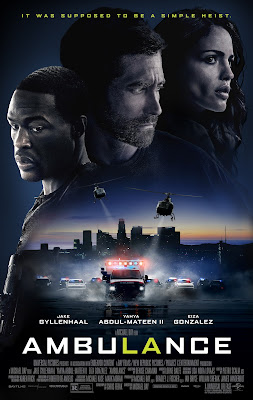 While Bay spent much of the last decade focused on the Transformers franchise (helming a whopping six entries between 2007 and 2017), he's been somewhat quietly focusing on more personal, moderately sized hits like Pain & Gain (2013) and 13 Hours (2016). While not the blockbusters that his Transformers films were, these projects are perhaps more representative of what Bay does best, and his latest film, Ambulance, is no different. On the surface it appears to be a rather straightforward heist film. Will Sharp (Yahya Abdul-Mateen II) is a former Marine trying his best to provide for his family, but after being repeatedly turned down by the insurance company for a life-saving experimental surgery for his wife, he turns to his brother Danny (Jake Gyllenhaal) for help. Danny recruits him for a bank robbery - an easy in-and-out job that will garner millions. But things do not go according to plan, and Jake and Danny find themselves commandeering an ambulance complete with a hostage paramedic (Eiza González) and wounded cop (Jackson White). With the full might of the LAPD bearing down on them, Jake and Danny become increasingly desperate as their ambulance careens through the streets of Los Angeles, turning their sure-thing into a deadly and volatile crisis that will change the direction of all their lives.

Based on the 2005 Danish film Ambulancen, Ambulance is a high-octane car chase thriller that finds Bay in top form. Bay has always been adept at crafting slam-bang action sequences, but this features a new level of intensity that grabs the audience by the throat and doesn't let go. Bay intersperses his scenes of mayhem with dizzying drone shots and slick cinematography that make the audience a part of the action in ways that few modern films ever attempt. The drone shots feel truly revelatory - they swoop, flip, and dive through the air, flying to the top of the LA skyline then seemingly freefalling back to the action below. It's some of the most stunning camerawork we've seen on screen in recent memory.

But beyond the spectacle of it all, the human drama of Ambulance is surprisingly grounded - and it's that personal element that make the stunning visuals all the more spectacular. At its core is a desperate man driven to extreme measures by the failure of the American healthcare system, and that makes his journey all the more compelling. He's not just an anti-hero, he's a hero; and despite Gyllenhaal's more flexible ethics, we are fully rooting for those in the ambulance rather than the cops on their tail. And while it would be a bit remiss perhaps to read Ambulance as some sort of ACAB political screed against the injustice of the American healthcare system, it's difficult not to see it as a very modern response to late-stage capitalism's increasingly dire human toll. Bay's no left wing ideologue, but Ambulance has a strong moral core amidst the maelstrom of carnage that it leaves in its wake. It feels like the last of a dying breed, a mid-budget, non-franchise actioner aimed at adults that feels like it was crafted by a true filmmaker in complete command of his craft, and it's difficult not to yearn for the days when something like this didn't feel like such a rarity. We didn't know how good we had it.