Clint Eastwood has spent the better part of 30 years, ever since at least his Oscar winning Unforgiven, examining and deconstructing his own star persona and his legacy as both a filmmaker and an actor. If Unforgiven was an exploration of his western persona, and Gran Torino and atonement of sorts for Dirty Harry, then his latest film, Cry Macho, seems to represent a career summation of Clint the man, and the masculine ideal that he has so long embodied. 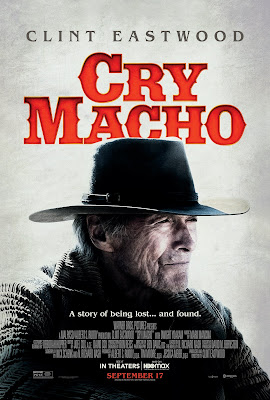 A great deal of Eastwood's late period work has been preoccupied with examining American myth making, from Flags of Our Fathers, J. Edgar, and the widely misunderstood American Sniper, to Sully and Richard Jewell, few other American filmmakers have spent so much time pulling back the facade on the lies we tell ourselves. It's interesting, then, that Eastwood's work is so often dismissed by left wing critics due to his stated right wing politics, because the text of filmography is anything but patriotic hagiography. Perhaps it's Eastwood's dogged libertarian streak and general distrust of the government, but Eastwood's cinema is all about questioning official narratives, and he isn't afraid afraid to turn that lens back on himself.

Cry Macho is very much at home amongst Eastwood's more laid-back late period films, occasionally resembling casual hangout films that are driven only by the loosest of plots. Eastwood stars as Mike Milo, a washed up rodeo star who's called upon by his boss (Dwight Yoakam) to travel to Mexico to retrieve his 13-year-old son, Rafo (Eduardo Minett), from his scheming mother. Upon arrival, however, Milo finds out that it isn't just the boy's mother who's scheming, and that Rafo is a lost young man caught between two unscrupulous parents who are using him as a park in a bitter divorce. Obligated to carry out his mission and return Rafo to his father, but on the run from his mother's agents and the Mexican federal police, Milo and Rafo lay low in a tiny Mexican village where they forge a tentative friendship, giving Milo a long awaited opportunity to be the father figure he never got to be.

Failed fatherhood is another fascinating through-line in Eastwood's work, and it rises to the fore here, as he plays a man trying to atone for the sins of his past by protecting another man's child in a way that he couldn't protect his own. Rafo, carrying his beloved fighting rooster named Macho, is filled with adolescent rage, his head filled with very clear ideas of what masculinity should look like, an ideal that Milo has long since come to understand is little more than a facade for weak men to hide behind. In that way, Cry Macho is Eastwood's own treatise on toxic masculinity. And while the film never digs as deep into its own themes as it could, it's impossible not to be fascinated by watching a filmmaker who has himself come to represent an outmoded ideal of masculinity attempt to tear down his own iconography and reveal it for the empty bluster that it is.

At 91 years old and still as vital and prolific as ever, Eastwood is still searching and growing, taking stock not just of a career but of an entire life. His legendary distaste for multiple takes and lack of perfectionism often result in some performances from his non professional cast that are rough around the edges, but there's something almost more authentic about it for that. There's a languid, lackadaisical quality to Cry Macho that might be misconstrued as lack of depth, but therein lies its deceptive charm. This is a filmmaker with nothing left to prove, a living legend reflecting on himself and his own mythology in ways that are rarely seen on screen. It's an elegiac western that feels like a reflective summation of an entire career. Minor Eastwood? No. This is the work of a major filmmaker refusing to go quietly into that good night.