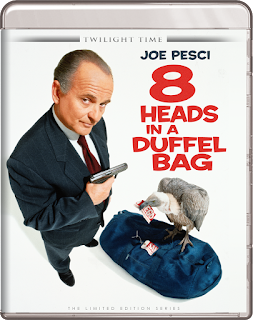 Joe Pesci stars as a mafia hitman tasked with transporting eight heads to the boss, only to lose them in an airport terminal bag mixup. The poor sap who ends up with the heads is meeting his future in-laws for the first time, and chaos ensues when they discover the bag's contents.

A kind of screwball re-imagining of Sam Peckinpah's masterful 1974 film, Bring Me the Head of Alfredo Garcia, 8 Heads in a Duffel Bag is a lifeless dark comedy with no real sense of pacing or fun. Pesci is a hoot, but the film doesn't seem to know what to do with him, trapping him in a dorm room interrogating two doofuses for half the run time. The biggest problem is that it's just not funny. It's fun to watch Pesci get pissed off, but the script is a mess and there are only so many head jokes that can be made. It's a dark comedy, but in order to be a dark comedy, one must first be funny. 8 Heads in a Duffel Bag is just unpleasant (not to mention outrageously culturally insensitive to the point of being borderline racist) - not really a gangster film, not really a romantic comedy, just a mishmash of lame set-pieces and never seem to jell into anything coherent. 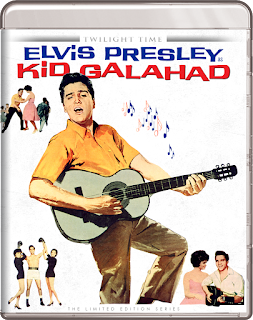 It is said that Elvis was disappointed by his acting career. Desperately wanting to taken seriously as a dramatic actor, he was instead typecast in frivolous musical comedies which were squarely in his comfort zone, but never really challenged him as a performer. Kid Galahad was a remake of a 1937 film by Michael Curtiz starring Edward G. Robinson, Bette Davis, and Humphrey Bogart, which was a serious gangster picture. Phil Karlson's take on the story was anything but. His Kid Galahad is a musical comedy, in which corn-pone country boy Elvis ends up boxing for a washed up promoter who's in serious trouble with the law. He becomes famous for his one punch knock-outs, but when the promoter finds the law bearing down on him, he conspires to throw the match and bet against his own fighter. Elvis sings, falls in love, and everyone goes home happy.

There's no denying that Elvis was a magnetic performer. However, the films he was in were often silly and even nonsensical. Kid Galahad seems to exist as an excuse to get him to sing, and little else. The story takes a back seat to the scenes in which Elvis sits down and sings (I hesitate to call them musical numbers, because it's just him singing for no apparent reason). Karlson took a dark story and turned it into a frothy, yet strangely flat, affair that feels like its spinning its wheels for most of its run time, flat-lining as it struggles to get to the next excuse to let Elvis sing.

Elvis wanted to spread his wings, and he clearly had the chops. Unfortunately, the films just wouldn't let him. Kid Galahad isn't terrible, but it's just so cookie-cutter that it lacks any personality of its own. 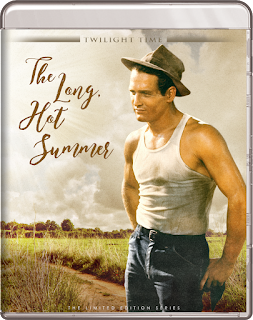 Fresh off a five year stint on the Hollywood blacklist, the great Martin Ritt returned with The Long, Hot Summer, adapted from three William Faulkner stories, and marking the beginning of a long and fruitful collaboration with star, Paul Newman. While the film is essentially a souped up, southern fried melodrama (produced by Jerry Wald, also responsible for the similarly scandalous, and ultimately superior, Peyton Place), it is marked by strong performances by Newman as a drifter running from his past, Orson Welles as a wealthy patriarch who takes him in, and Joanne Woodward as the daughter who catches Newman's eye.  Angela Lansbury also makes use of minimal screen time as Welles' independently minded mistress.

Ritt would go on to make better films, more focused and tightly directed, but The Long, Hot Summer is nevertheless an actors showcase, something Ritt excelled at. He had instinctual knack for knowing when to hold back and let Newman's blue eyes smolder. It may be a soap opera at heart, but its keen sense of place and character make it worthwhile. 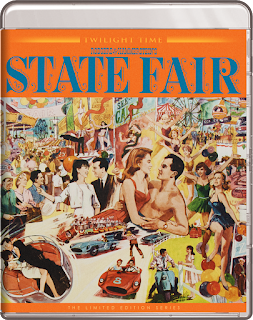 Rogers and Hammerstein's only original movie musical, State Fair was originally made in 1945, before being remade and "modernized" in 1962 by Jose Ferrer, starring Pat Boone, Bobby Darin, Pamela Tiffin, and Ann-Margaret. Filmed in glorious Cinemascope, STATE FAIR is certainly a brightly colored spectacular, although the musical numbers are rather flat and unimaginatively staged. Some of the big numbers are staged with a static camera in front of a lot of dancers, a technique which felt dated even in 1962. It doesn't help that the songs aren't particularly memorable (and the less said about "Never Say No to a Man" the better).

Still, State Fair has its charms - following a group of country kids into the big state fair for a three day excursion that includes carnival rides, livestock competitions, and romance. The squeaky-clean Boone has an eye for the ever so slightly "trashy" showgirl, Ann-Margaret (quite a turnaround, considering the extremely conservative Boone refused to kiss a woman who wasn't his wife just five years earlier in April Love), while crooner Bobby Darin romance's Boone's innocent younger sister. They're attractive leads, to be sure, and not bad company for two hours. Still, the film itself feels a bit bloated, especially considering how the original 1945 film was meant to celebrate a more small-town affair than a big city extravaganza. 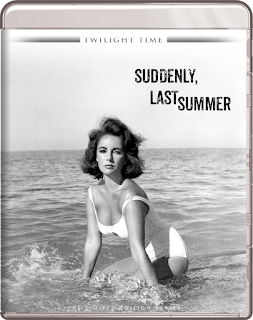 Widely condemned as obscene (but approved under the Hays Code anyway), Joseph L. Mankiewicz's cinematic adaptation of Tennessee Williams' Suddenly, Last Summer is a deliciously sordid tale of madness and betrayal. Elizabeth Taylor stars as a young woman named Catherine who is driven mad after the death of her friend, Sebastian, while on a vacation the previous summer. Her aunt Violet (Katherine Hepburn), Sebastian's mother, hires a renowned neurosurgeon (Montgomery Clift), to lobotomize Catherine in order to relieve her insanity, promising him major funding for his crumbling hospital in return. But the more he interviews Catherine, the more he begins to suspect that Catherine is perfectly sane, and that Violet is trying to cover up a dark family secret.

Both Taylor and Hepburn received well deserved Oscar nominations for their performances, and indeed they are far and away the highlight of the film. Is there any entrance in the history of cinemas as grand or as memorable as Hepburn's descent from an elevator in the ceiling of her mansion? It's a psychological cat fight that borders on camp (Mankiewicz was also responsible for All About Eve), with the regal Hepburn clashing with the younger Taylor with venomous relish. The script by Gore Vidal, based on Williams' one-act play, is a thing of ferocious beauty, tackling issues of homosexuality, adultery, incest, and even cannibalism, in a potent witches' brew of subjects that were taboo in 1959. Its content even caused John Wayne to remark that the film was a "poison polluting Hollywood's moral bloodstream" and that it was "too disgusting even for discussion." And while this may seem quaint now, Suddenly, Last Summer remains a remarkably salacious descent into madness, thanks to Mankiewicz's harrowing direction and two towering performances by Taylor and Hepburn (playing second fiddle to another actress for the first time since the 1930's), who turn the film into a titanic showdown between two of the era's greatest personalities. 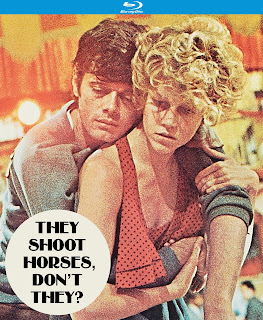 Perhaps one of the most harrowing and heartbreaking films ever made, Sydney Pollack's They Shoot Horses, Don't They? is a painful and powerful allegory for the exploitation of the poor in America. Jane Fonda and Michael Sarrazin star as an unlikely couple who find themselves partners in a Depression-era dance competition, that invites people to engage in a grueling dance marathon that can last months, dancing continuously until only one couple is left standing to claim a $1,500 prize.  The competition becomes something of a human spectacle, as people flock from all over to watch hundreds of desperate people dance for thousands of hours, putting life, limb, and sanity on the line for a tiny chance turn their fortunes around.

Based on the novel by Horace McCoy, They Shoot Horses, Don't They? is perhaps one of the most indelible depictions of the utter despair of cyclical poverty ever put on screen - right up there with Vittorio De Sica's Bicycle Thieves and Umberto D (a film which it rivals as perhaps the saddest of all time). Here, poverty becomes  a grotesque game, exploiting desperate people with nowhere else to turn for the entertainment of the masses. In fact, it's never been more terrifyingly relevant than it is now. Its characters are trapped in a vicious cycle from which they cannot escape (even discovering that if they win, they will be charged for their participation in the event), trying to claw their way out of poverty only to be dragged back down. Even when they win, they lose - having worked so hard for so little. It's a striking, haunting film that is often difficult to watch, but impossible to look away from. The central performances by Fonda and Sarrazin are magnetic, while Gig Young went onto win an Oscar for his multifaceted portrayal of the master of ceremonies, a world-weary carnival barker who is both sympathetic to their plight, but ultimately just another cog in a wheel of a system he cannot change.  The new Blu-Ray from Kino Studio Classics is a thing of beauty - featuring a lovely fine grain (giving it an evocative, film-like look) and muted color palate to reflect the film's depression-era setting. If there was ever a film that completely captures the utter desperation and despair of poverty, it's this one.