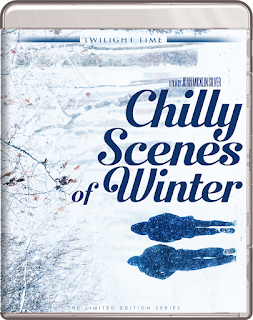 CHILLY SCENES OF WINTER (Twilight Time)
Originally released in 1979 as Head Over Heels, Chilly Scenes of Winter was re-released in 1982 with a new ending and sporting the original title of Ann Beattie's novel on which it was based. Billed as a "romantic comedy," it's actually much more subtle and downbeat than what one would general consider a rom-com. John Heard plays a professional who falls in love with a married woman, who just happens to be having marital troubles with her husband. When she decides to go back to him, however, that sends Heard into an obsessive tail-spin.

Chilly Scenes of Winter covers some pretty dark territory in relationships, although its tone remains mostly light. It's naturalism is perhaps its greatest asset. There's never any malevolence in the characters' actions, but it feels like such an honest exploration of the kind of all-encompassing infatuation and the tricky waters of romantic attraction. Every choice rings true. In fact it feels so normal it almost loses its dramatic thrust, and Heard's occasional fourth-wall-breaking asides seem out-of-place with the rest of the film. There's not a lot to hang on to here, but it is marvelously performed. 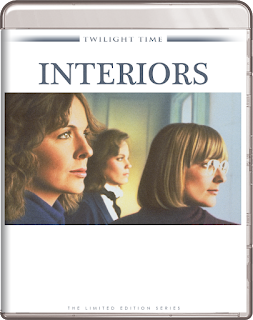 INTERIORS (Twilight Time)
In his first dramatic film, Woody Allen paid homage to one of his greatest cinematic heroes, Ingmar Bergman. Indeed, every frame of Interiors seems almost haunted by Bergman, from Gordon Willis' chilly cinematography, to the hushed, portentous atmosphere, it certainly feels like a lost Bergman film, even if it often lacks the legendary Swedish director's depth.

The story of three adult sisters whose family is torn apart by their father's sudden abandonment of their controlling mother, Interiors has all of Allen's existential crises without any of his trademark comedy. The result is hit and miss, often as self-consciously somber as it is engrossing. The performances are the highlight here, each one is a standalone highlight, even if Maureen Stapleton is a mid-film shot of adrenaline. It's dramatic elements may feel a bit disjointed, but Allen's mastery of dialogue and character detail keep Interiors from slipping too deeply into self-seriousness. 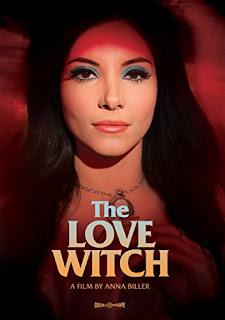 While many of these films existed mainly to titillate with the promise of bare female flesh (rarely delivering on their own lurid premises), The Love Witch turns the concept on its head. There is certainly flesh to spare, but Biller isn't letting the audience off the hook here. Her story of a young witch whose desperation for love leads her to develop a sex potion designed to give men what they want, believing if she fulfills their sexual fantasies it will translate into love, resonates with more sophisticated flair than much of its exploitation brethren. Instead of making them fall in love, the potion drives them mad, causing them to commit suicide. It isn't long before the men of the town bring out their figurative torches and pitchforks in an effort to kill the witch. It's an alluring and engaging allegory for modern sexual politics, where women give into the fantasies of men, only to be punished for it later by a society that fears the very sexually liberated women it claims to champion. I loved every minute of this film. As a fan of Rollin and Bava, I was especially impressed by the Biller's fidelity to the genre. She clearly has a strong understanding of what made these exploitation films what they were, and how to use their structure to achieve a greater thematic depth. The Love Witch is a veritable orgy of sinful cinematic tropes, re-purposed and re-imagined for a new time by an artist working at the top of her game. 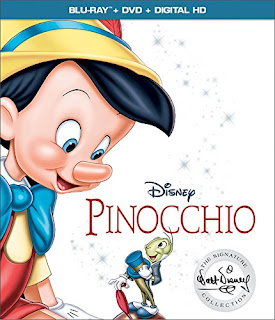 I feel like Pinocchio is often overlooked in the Disney canon. While "When You Wish Upon a Star" has become the de-facto Disney theme song, the film itself almost stands in the shadow of its predecessor, Snow White and the Seven Dwarfs, which has the distinction of being the first feature length animated film. Disney had a lot riding on the follow-up, and the result is one of his finest achievements.

It's surprising how dark this thing is. Pinocchio is a warning to children as much as it is a charming piece of entertainment, and the results of Pinocchio's misbehavior are occasionally terrifying (what child didn't grow up thinking lying would make their nose grow?), with nightmarish imagery that makes for some of Disney's darkest moments. While much of this kind of thing wouldn't fly today (the smoking, the drinking), it makes Pinocchio's journey that much more harrowing and his redemption all the more moving. It's a beautifully animated work whose enduring message of simple goodness continues to resonate, anchored by some of the most endearing characters and sidekicks that Disney ever created. 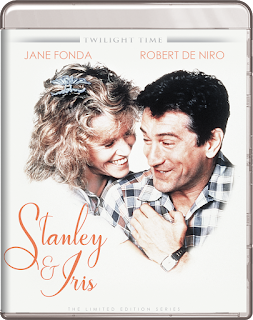 STANLEY & IRIS (Twilight Time)
I've always felt that John Williams' score for Stanley & Iris is one of his most overlooked gems. It's small scale, unassuming, based only on two simple, straightforward themes, which it repeats for most of its short running time. But that's not unlike the film itself - small, lovely, earnest, never spectacular but always charming. Stanley & Iris, the final film by the great Martin Ritt, is anchored by two graceful performances by Robert DeNiro and Jane Fonda as the eponymous duo; Stanley, an illiterate cook, and Iris, a factory worker who decides to help him learn to read.

The film has a kind of quiet dignity about it, as Iris helps Stanley regain his confidence through finally learning to read, a handicap which has held him back his entire life. They fall in love along the way, of course, and the film has very little in the way of conflict or drama. But Ritt explores the crippling impediment of illiteracy without turning it into an "issue drama," quietly crafting a tender and heartfelt love story that coasts along on the strength of its stars magnetic and lived in performances. It's the very definition of a "nice" film, never offending, never offering emotional fireworks, but hitting its notes with Ritt's soft-spoken grace.