Blu-Ray Review | "The Squid and the Whale" 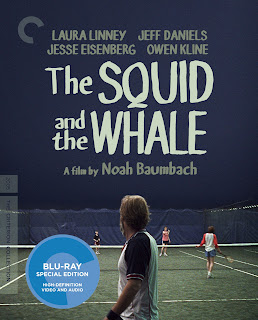 Anyone who doubts that we are currently living in a new golden age of cinema need look no further than this year's Criterion Collection releases. Ignoring the films that were released as part of their partnership with IFC Films, Criterion has released five films from the 2000s on Blu-Ray in this year alone - Terrence Malick's The New World (2005), Stig Björkman's Ingrid Bergman: In Her Own Words (2015), Guillermo Del Toro's Pan's Labyrinth (2006), Paul Thomas Anderson's Punch-Drunk Love (2002), and now Noah Baumbach's The Squid and the Whale (2005).

You'd be hard-pressed to find a comedy as unrelentingly dark as The Squid and the Whale, an acerbic look at the dissolving of a family set in New York in 1986. Clearly a deeply personal work for Baumbach, The Squid and the Whale examines the deeply toxic effects of two parents warring over divorce proceedings on the children caught in the middle. In this case, Walt (Jesse Eisenberg) is unflinchingly loyal to his father, Bernard (Jeff Bridges, never better), a pompous author turned college professor whose writing career never took off the way he believed it should, while young Frank (Owen Kline) is more drawn to his mother, Joan (Laura Linney), a softer spoken aspiring writer whose open nature has been just as destructive to her family as Bernard's arrogance.

The selfishness of these two parents is on full display, too concerned with scoring points against each other to notice that their children are in pain. Walt has turned his father's sense of intellectual superiority into a mask for his own feelings of inadequacy, plagiarizing a Pink Floyd song at a school talent competition and dismissing his new girlfriend's tastes to build himself up. Frank, on the other hand, takes to masturbating and smearing his semen on library books and lockers around the school, acting out in increasingly troubling ways that remain invisible to his warring parents, who continue to use the children as pawns in their own short power struggles, where "it's MY night" becomes a familiar joint-custody refrain that trumps both child's wishes.

Yet despite the acidic tone, The Squid and the Whale is a disarmingly funny film, one that offers a wealth of insight into the modern American family. Baumbach writes with often scathing wit, but it comes from a place of love for these people, for this place, for this family. He is not belittling them, he is mourning them. As they tear each other apart for their own selfish ends, they can't see past their own needs long enough to realize that deep down they really do care. Baumbach's humor here is bruising, we laugh often because we are shocked at the characters' behavior. But it all feels so painfully real that it's hard to shake. Baumbach doesn't delve into histrionics, each character feels fully formed, each a product of a life lived long before the film begins. There's an almost organic quality to it all (it was shot on purposefully grainy Super 16 film, beautifully rendered by the new Blu-Ray), like home movies we shouldn't be watching. We laugh that Bernard crashes his son's date and talks them into seeing the racy Blue Velvet instead of more family friendly Short Circuit, but there is a underlying melancholy to it all, an understanding of the great damage being wrought in the name of love. It's a powerful work, a film whose humorous exterior belies a deep understanding of family dynamics that continues to resonate today.

On Blu-Ray and DVD from the Criterion Collection on November 22.