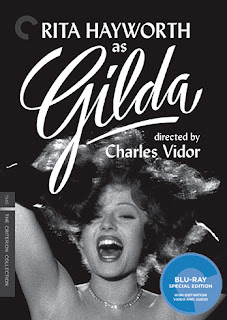 GILDA (★★★½)
There are few entrances in all of cinema as iconic as Rita Hayworth's in Gilda, emerging from the bottom of the frame, tossing back her mane of hair, effortlessly sexy and (in 1946) a woman fully in control of her own sexuality.

It's easy to see why Hayworth became such a sensation. Gilda is a strange animal, to say the least. At once a hard boiled film noir and a romantic melodrama, with Hayworth as a sexy ingenue rather than a femme fatale. It feels as if she should be in a musical or a romantic comedy, yet the film around her is a dark tale of betrayal and murder. Layers upon layers of emotion and feeling pile up, leaving the audience both uneasy and at times confused. Director Charles Vidor leaves much of the characters' motivations in the shadows, as if the barely know their own selves, let alone each other. Glenn Ford's grizzled, noir narration even disappears by the film's end, leaving the audience in the dark, much like its characters. Gilda is a film of textures and moods, light and shadow, cast in shades of gray where black and white are merely the colors of the film. Now on Blu-Ray and DVD from The Criterion Collection. 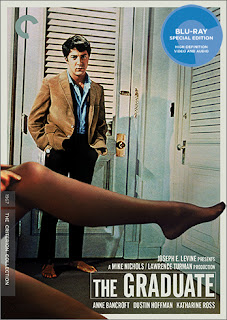 THE GRADUATE (★★★★)
Benjamin is worried about his future. Fresh out of college, spending his days drifting in his parents' pool, Benjamin has no idea what he wants to do with his life. That is until he is seduced by a family friend, Mrs. Robinson, and begins a mostly passion-less, summer-long affair, before developing feelings for Mrs. Robinson's daughter.

There are few more indelible portraits of youthful ennui than The Graduate, with its memorable evocation of Boomer restlessness in a rapidly changing world. Yet as much as the film is a product of the 1960s, it remains somehow timeless, ignoring era-specific references that could have easily dated it. Instead, it focuses on Benjamin, a young man who has no clue what he's supposed to do with his life. It's the ultimate "what now?" movie. It's a question that remains unanswered, which is what continues to make The Graduate still so relevant today. Through Dustin Hoffman's star-making performance, through Simon & Garfunkel's now iconic soundtrack, through Mike Nichols' canny direction, The Graduate captures youth at a crossroads like no other film. And while its ending seems ripped right out of a cheesy romantic comedy, there's a melancholy question mark that continues to hang over the entire film. Five decades later that question mark still haunts, not just because of its uncertainty, but because of how little things have changed. On Blu-Ray and DVD from The Criterion Collection on Feb. 23. 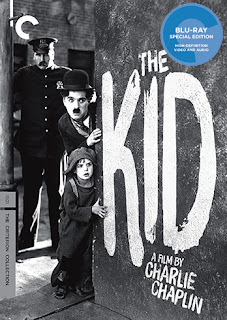 THE KID (★★★½)
Charlie Chaplin moved into the world of feature films with 1921's The Kid, blending slapstick comedy with sentimental melodrama in a way that would come to be his trademark. Here, his iconic Tramp meets a little boy who was abandoned by his mother after being born out of wedlock, and reluctantly becomes a father. Over the course of five years, the two form an inseparable bond, until a county doctor finds the boy's living conditions unsuitable, ordering him removed from the house,

The Kid remains one of Chaplin's most deeply affecting works. There are few scenes in all cinema as heart-wrenching as the one in which the boy is forcibly removed from his home by the authorities to be carted off to the orphanage. Chaplin's transition from short form comedy to feature length dramedy isn't always a smooth one - the ending remains abrupt and the final dream sequence feels like an unnecessary distraction from the plot, included to fill time rather than progress the story. Still, Chaplin proved himself equally adept at tickling funny bones and pulling heartstrings, and his chemistry with young Jackie Coogan remains one of cinema's great onscreen pairings. The film itself has never looked as good as it does on Criterion's new Blu-Ray, which brings the now 94 year old film look crisp and new. The disc also includes Nice and Friendly, a 1922 short film starring Chaplin and Coogan. Now on Blu-Ray and DVD from The Criterion Collection. 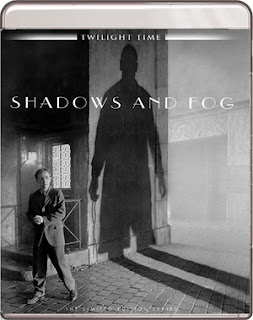 SHADOWS AND FOG (★★★)
Woody Allen's loving ode to German Expressionism is perhaps the most visually stunning film of his career, even if the film itself occupies a rather minor place in the director's canon. Drenched in Weimar-era delights, from the Kurt Weill tunes on the soundtrack ("Mack the Knife" has never had such a keen emotional impact), to the fog-laden, backlit streets of Eurpoe, Shadows and Fog creates such an indelibly intoxicating atmosphere that it's hard not to become lost in its more sensual pleasures.

On the other hand, the content of the film is rather thin, despite its take-off on the plot of Fritz Lang's M. Allen stars as a nebbish-y coward who finds himself caught up in a vigilante crusade to find a phantom strangler who is stalking the streets at night, yet despite his seemingly important role in finding the killer, he never actually discovers what his job is supposed to be. Along the way he gets caught up with the police, meets a merry band of man-hating prostitutes, and befriends a sword-swallower on the run from the circus (and her philandering husband). Shadows and Fog features a never-ending litany of cameo performances - Mia Farrow, Lily Tomlin, Jodie Foster, Kathy Bates, John Malkovich, Donald Pleasance, John Cusack, William H. Macy, John C. Reilly, David Ogden Stiers, Wallace Shawn, and Madonna all show up in one capacity or another. It's a consistent joy, but it's also unfocused, showcasing Allen's tendency to get lost in unnecessary subplots. It's all so beautifully done that it's often easy to ignore its faults, but once you get past its breathtaking imagery there's unfortunately not a lot going on here, especially when you have so much material to work with when you're cribbing from the films of Lang, Pabst, and Murnau. Now on limited edition Blu-Ray from Twilight Time.
Email Post