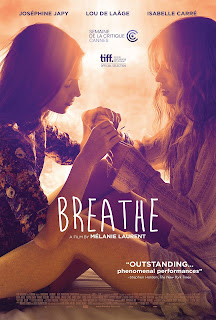 Mélanie Laurent is perhaps best known to American audiences as Shoshonna, the Jewish girl who burns the Nazi high command alive in her theater from Quentin Tarantino's Inglorious Basterds. But after Breathe, her sophomore effort behind the camera, she has established herself as quite an accomplished director as well.

Based on the novel by Anne-Sophie Brasme, Breathe has the sheen of your typical coming of age high school film. You have your quiet high school senior named Charlie (Joséphine Japy), who becomes infatuated with the free spirited new girl in school, Sarah (Lou de Laâge). Over the course of a weekend at the lake, Charlie and Sarah become fast friends, completely inseparable, to the point that you never see one without the other.

After their return to reality, however, things begin to change for Charlie and Sarah, and they slowly begin to grow apart. Sarah's troubled home life threatens to catch up with her, and Charlie's intense obsession with her begins to push her away.

On the other hand, Sarah begins spending more time with another friend, leaving Charlie behind. Yet Charlie still feels an intense attraction to Sarah, even though it becomes increasingly apparent those affections are not returned. Charlie soon finds herself an outcast at school, a constant target of Sarah's mean-spirited bullying. It comes down to Charlie to decide how deep her love for her former friend runs, and just how much abuse her selfless devotion can take. 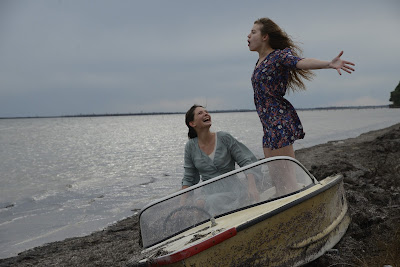 Breathe is not your typical coming of age melodrama. There's something unusually incisive at work here. It is neither a love story nor a tale of platonic friendship, instead it exists somewhere in that confusing gray area in which teenage friendships often exist. It begins passionately, the kind of immediate attraction that bonds them together with a shared intensity, and then flames out just as quickly. Such is the nature of high school relationships, but Charlie just isn't ready to let go, and Sarah means so much more to her than she means to Sarah. Sarah is the alpha female, the cool girl, who isn't afraid to cast Charlie aside when it becomes convenient to her social advancement. Laurent displays a keen understanding of teenage friendships - of the intense emotions and the painful inevitability of growing apart. She directs in languid long takes, to the point that the camera feels as if it is a part of the action. It feels as if it were captured live rather than directed, a testament to Laurent's considerable skills. Even when the actions of the protagonists don't quite make sense, we are reminded that the actions of teenagers don't always make sense. They're volatile, finnicky, and emotionally unstable. Breathe delves deep into that, and doesn't pull punches. Its emotional timbre rings of truth at every turn.

This is a painfully honest examination of young love and the sometimes predatory nature of friendship, that tests how far even the deepest devotion can be tested. Like The Tree of Life's "way of grace" and "way of nature" pitted against each other, it is an assured coming of age tale that takes us down dark and unexpected paths, into testing the very fabric of human relationships.