For several years now, I have written monthly home video columns for The Dispatch in which I reviewed new Blu-Ray and DVD releases that I may not have otherwise been able to review in print. This will continue, but unfortunately limitations on space have forced me to cut back the amount of discs I am able to review. So I have decided to introduce a new feature here at From the Front Row called From the Repertory. This will allow me to review new releases of classic films, rereleases, and even some current independent and foreign films, while focusing on major Hollywood releases at The Dispatch.

Ideally, this will expand my ability to discuss older films in greater depth, and create my own version of a repertory cinema here at From the Front Row, spotlighting worthwhile releases from specialty outlets like Criterion, Kino, Flicker Alley, and Twilight Time.

THE BEST ARBUCKLE/KEATON COLLECTION (Flicker Alley, 1917-1918)
Flicker Alley recently unveiled their new manufactured on demand program through their website, with 20 discs available for purchase. It's a great idea, allowing many classic silent works to be available on home video in affordable, cost effective ways. While they may not have the same quality or special features we have come to expect from Flicker Alley's other efforts, this program is a fantastic way to make some forgotten gems available for the first time. One of the highlights of this program is The Best Arbuckle/Keaton Collection, which gathers some of the best of the comedy pair's short films, before Buster Keaton struck out on his own in 1920. Roscoe "Fatty" Arbuckle was far better at creating individual gags than he was at sustaining their manic energy over the course of an entire film (something his apprentice, Keaton, would later perfect). Instead, his films play like training grounds for talented comedians, bouncing ideas off each other and trying out new gags. The films themselves are a mixed bag, but it's fascinating, especially for fans of Keaton, to watch him grow, along with Arbuckle's skills as a director. ★★★

CRIES AND WHISPERS (The Criterion Collection, 1972)
One of Ingmar Bergman's most deeply introspective films, Cries and Whispers is a hushed and devastating exploration of death, as two sisters hold vigil over the deathbed of their dying third sister. While not quite the psychological rabbit hole that is Persona, Cries and Whispers is nevertheless a film very much preoccupied with the inner life of the sisters, as well as their faithful servant, who, in the end, is more of a family to the dying woman than her own flesh and blood. It is a boldly abstract (with a striking color palate dominated by the color red) and hauntingly emotional emulation of the threshold of death, that is often incredibly beautiful, often obfuscating, but always completely fascinating. The special features on the new Blu-Ray may not offer any greater insight into Bergman's process than other Criterion discs of the director's films already have, but Sven Nyqvist's Oscar-winning cinematography is absolutely stunning in the new 2K digital restoration. ★★★½ 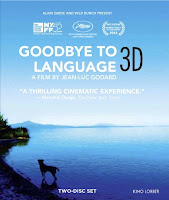 GOODBYE TO LANGUAGE (Kino, 2014)
In 1967, Jean-Luc Godard infamously declared the "end of cinema" at the close of his most radical masterpiece, Weekend, before descending into a period of underground, Marxist filmmaking from which he never quite emerged. In his latest film, he bids farewell to language, but rather than seek to bury has his younger self did, the 84 year old raconteur seeks to expand, dismantling then rebuilding the cinematic language into something thrillingly new. Goodbye to Language is less a deliberate provocation like his last film, Film Socialisme, and more of a bold, purposeful cinematic experiment. Yet Godard refuses to give us anything familiar to hang on to. Every time it seems like he may give us something resembling traditional or familiar film form, he yanks it out from underneath us, forcing us to reevaluate the very way we watch and engage with movies. He explores philosophies of language and human communication while singlehandedly revolutionizing the medium and how movies are made. With a breathtaking use of multiple planes of space and its vibrant, oversaturated color palate, Goodbye to Language bids adieu to old modes of expression and through the use of modern tools and technologies strips down (literally and figuratively) the art form to its barest essence, before reconstructing it into a wholly unique and groundbreaking work. If this is the future of cinema - I'm in. For those who aren't convinced, the essay by David Bordwell that is included in the 2-disc Kino Blu-Ray (which features both the 2D and the 3D versions of the film) is almost worth the price of the disc alone. Bordwell cannily dissects the film in such a way that a second viewing actually seems even more fresh. ★★★½ 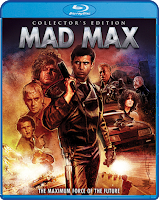 MAD MAX (Shout Factory, 1979)
George Miller's nihilistic vision of the future launched the career of young Mel Gibson, and set the tone for the every post-apocalyptic movie that followed. It's interesting to see now just how little Max is actually in this film, as parts of it seem to be a little too easily distracted by its own grim universe. Still, the quiet, grittiness is reminiscent of Sergio Leone, and the stunts remain incredible to this day. Miller's hard edged take on the future took us away from the optimistic view of the future we had so often seen, and took us directly into a bleak, post-Vietnam wasteland, setting up a superior sequel that would build on the foundations that Miller lays here. ★★★

SULLIVAN'S TRAVELS (The Criterion Collection, 1941)
"There's a lot to be said for making people laugh. Did you know that that's all some people have? It isn't much, but it's better than nothing in this cockeyed caravan." A famous Hollywood director, sick of making what he considers frivolous comedies, wants to make the ultimate cinematic examination of poverty (in the form of a film called O Brother, Where Art Thou?), decides to head out amongst the less fortunate disguised as a tramp in order to better depict the plight of the poor. Along the way, however, he discovers that the poor don't want to be reminded of their poverty, they just want to laugh. In Sullivan's Travels, director Preston Sturges gives us perhaps the quintessential defense of comedy the movies have ever seen. Released in December 1941, the film arrived at the end of the Depression and the beginning of WWII, and at no time in our history was there a moment more perfect to escape, if only for a moment, and be able to laugh. Fans of Sturges will want to pick up the disc to check out  Preston Sturges: The Rise and Fall of an American Dreamer, a full length American Masters doc that provides an indispensable look at the legendary director. ★★★★

WINTER SLEEP (Kino, 2014)
Nuri Bilge Ceylan's sublimely autumnal Palme d'Or winner follows a former actor whose new life as a hotel manager no longer feels as safe and comfortable as it once did, leading to conflict with his sister and his idealistic young wife. Has a laid back, lived in quality, but also an urgency and vitality that his hard to shake. The screenplay, written by Nuri Bilge and Ebru Ceylan, adapted by a short short by Anton Chekhov, is a remarkable piece of work, exploring the depths of its characters discontent on a personal, political, and spiritual level. Ceylan deftly juggles these themes into his most vital work, a massive 3 hour plus epic that turns a personal journey and crisis of self into a haunting sort of poetry. There are no extras on the new Kino Blu-Ray, which is a shame given that the film was so widely hailed. But the ravishing cinematography really shines, and losing yourself in this beautiful film is now easier than ever. ★★★½ 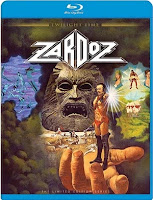 ZARDOZ (1979, Twilight Time)
After directed the Oscar-nominated film, Deliverance, John Boorman turned his attention to this bizarre sci-fi epic about a dystopian future where the wealthy have separated themselves from the poor, and use a giant floating machine head "god" named Zardoz to control the barbaric masses. Sean Connery stars as one of their barbarian enforcers, charged with killing those who still breed, stows away inside the god head, he infiltrates the world of the rich, where they have achieved immortality, only to long for the release of death. Filled with philosophical musings on religion (especially as a tool to control and subjugate) and sexuality, Zardoz is a wholly singular experience that has become something of a cult classic. Boorman is clearly fascinated with the idea of searching for god, finding him, and ultimately destroying him to embrace mortality rather than everlasting life. While not all of the ideas explored in Zardoz ultimately work, it alternates between silly and profound, I think Boorman was onto something here. It's a wildly experimental work that certainly leaves a lasting impression. ★★★
Email Post