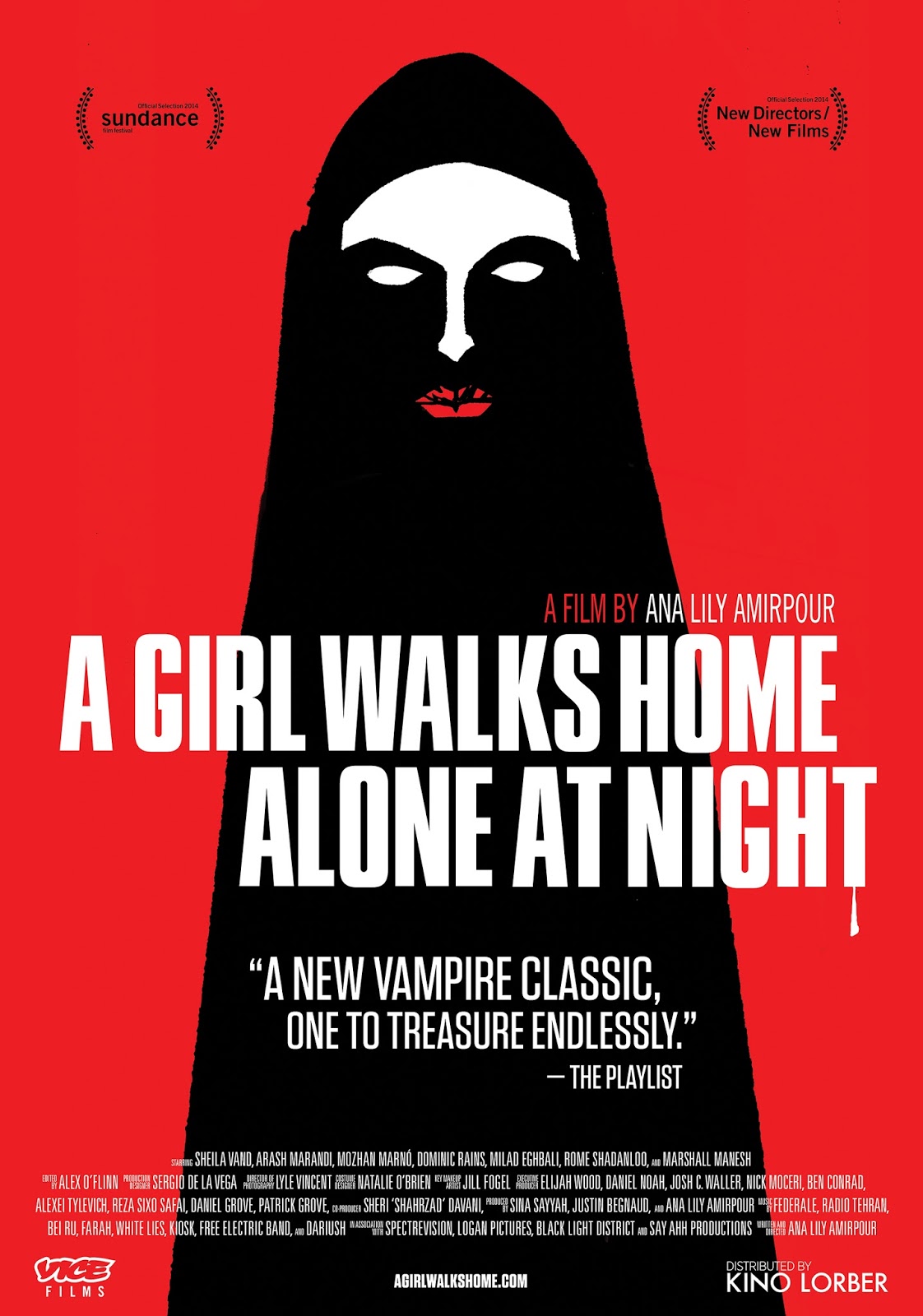 It is interesting that this year's two best horror films, A Girl Walks Home Alone at Night and The Babadook, were both directed by women.

Described as "the first Iranian vampire western," Ana Lily Amirpour's  A Girl Walks Home at Night feels like a finger in the eye of a patriarchal society, but more than that, of a patriarchal genre. It's no secret that the horror genre has always been male-centric; made by men, marketed to men, and featuring lots of scantily clad women in distress.

There is female nudity in A Girl Walks Home at Night, but here it doesn't feel exploitatitve, it feels revolutionary. This is, after all, an Iranian film, directed by an Iranian woman. Much like Haifaa Al-Mansour's Wadjda (2013), an essentially feminist tale that became the first Saudi Arabian film ever directed by a woman, A Girl Walks Home Alone at night is something of a landmark coming out of the oppressive Islamic regime.

Plot-wise, there doesn't seem to be too much going on here. The film centers around a burqa-clad vampire stalking the streets of a fictional Iranian town called Bad City, preying on the lonely and predatory men. Lest you get the impression this is some sort of feminist revenge fantasy, think again. Our vampire is an equal opportunity blood sucker. But there is something about a sexually empowered Muslim woman preying on men in a historically patriarchal country that is hard to ignore. It's certainly an indelible image, one that makes up the film's haunting and unearthly center. But that's where any semblance of a conventional plot ends.

The vampire, it turns out, is lonely herself; starved for attention and in need of friendship. She finds that friendship in the form of another lonely soul. This is where Amirpour delves into more surreal territory. If you come to the film looking for a plot, you may find yourself confused or frustrated. But you would also be missing the point. Watching A Girl Walks Home Alone at Night, I was reminded of the work of Jean Rollin, whose trademark brand of surreal erotic horror in films like The Nude Vampire, Lips of Blood, and The Iron Rose feels like a spiritual predecessor to Amirpour's film.

Rollin's films rarely made sense - but that wasn't the point. But this is no mere empty exercise in style. A Girl Walks Home Alone at Night incorporates elements of the horror and western genres, then throws in some film noir for good measure, to create a truly unique genre synthesis. By upending audience expectations, Amirpour deconstructs then reconstructs her chosen genres in increasingly fascinating ways. There's just nothing else out there like it. Amirpour, along with Jennifer Kent, have muscled their way into the horror boys' club by giving us scares that go much deeper than the usual jump scares and gore. While Kent goes for psychological horror, Amirpour goes for something otherworldly, a creeping unease that completely eschews conventional ideas of fear, centered around a female character who serves as both antagonist and protagonist, monster in the dark and damsel in distress.

That's what makes A Girl Walks Home Alone at Night such a special film. Amirpour asserts her own singular voice with such staggering confidence that the film is impossible to ignore. It completely defies filmmaking convention, announcing the arrival of a towering new cinematic talent. A black and white Iranian vampire western directed by a woman may sound like the Loch Ness Monster of horror movies, but it's actually the best thing that the horror genre has given us in recent memory.