Blu-Ray Review | "Fate is the Hunter" 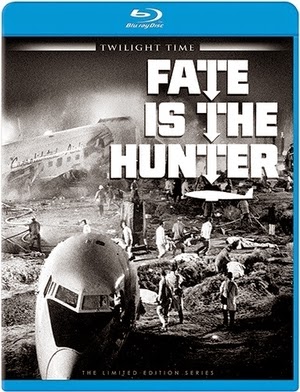 Released on the heels of the disappearance of Malaysian Airlines flight 370, one of the greatest aviation mysteries of all time, Twilight Time's new Blu-Ray of Ralph Nelson's Fate is the Hunter (1964), couldn't have come at a better time.

Not released to capitalize on the tragedy (it was in the works long before the missing plane flew into history), the disc instead arrives at a time when interest in aviation disasters is at a fever pitch. It's a relatively obscure title (despite the presence of stars Glenn Ford, Rod Taylor, and Suzanne Pleshette), but this is what Twilight Time really excels at - releasing top quality transfers of films the studios have no interest in releasing on Blu-ray. As such, the label is a favorite amongst hardcore cinephiles, despite their limiting releases to a mere 3,000 copies.

Yet despite the timeliness of its release, Fate is the Hunter isn't exactly a long lost masterpiece. It's a solid film, however, and one almost begging to be discovered at this point in time. It's part disaster film, part procedural, following the aftermath of a mysterious jet liner crash that claims the lives of over 50 passengers and crew. What separates the film from the other disaster movies of the era is that the plane actually goes down before the opening credits, its fiery descent punctuated by the arrival of the title and the credit sequence, setting the tone for the film to come. Unfortunately the film never again achieves those heights that it demonstrates by that initial jolt of energy, choosing instead to focus on the investigation into the causes of the crash.

That's actually a great approach to take, but the film does so with all the energy and verve of one of CNN's MH370 reports. So Fate is the Hunter becomes a kind of collection of moments, some listless, some sublime, in a film that actually feels startlingly contemporary. I couldn't help but be reminded of Robert Zemeckis' Flight, as Rod Taylor's pilot becomes the target of a posthumous investigation into his sobriety at the time of the crash. Flight is actually the superior film, but Fate is the Hunter has a strange sort of allure to it that is hard to shake. 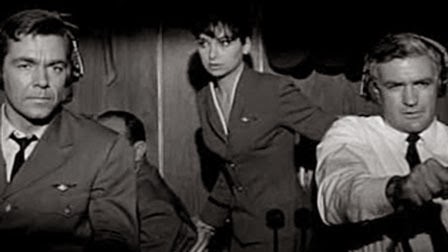 It was shot by the great cinematographer, Milton Krasner (All About Eve, King of Kings), who received a well deserved Oscar nomination for his evocative work here. The Blu-ray transfer is crisp and clear, with striking black and white contrast, perfectly capturing Krasner's noir-ish work. The transfer is what is most impressive about this release, which probably would have gone mostly unnoticed if it hadn't been a Twilight Time release. While their special features are usually pretty bare bones (isolated scores are a big thing here, being affiliated with soundtrack label Screen Archives Entertainment), Twilight Time has starting upping their game with impressive releases of films like David Lynch's Wild at Heart and cult classic Thunderbirds are Go, each of which boasted extensive features.

Included with Fate is the Hunter is the feature length documentary, To Whom it May Concern: Ka Shen's Journey, chronicling the life of Nancy Kwan, one of the first major Asian American actresses to break through in Hollywood. Directed by Brian Jamieson (who is also one of Twilight Time's founders), the film offers some interesting insight into a fascinating woman who has gone mostly overlooked by Hollywood history. Kwan also appears on a commentary track with film historian and Twilight Time co-founder, Nick Redman.

It's not particularly surprising that a studio didn't want to release a film Fate is the Hunter on Blu-ray. There's just not that big of an audience out there for films like this. But that's what I love about Twilight Time, they're willing to take risks, and in the process unearth some under appreciated gems. This is one of those that is ripe for rediscovery, and now film fans have a chance to discover a 50 year old film that looks and feels like something completely new.