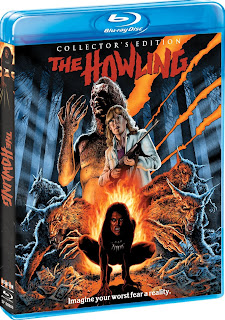 Whether or not they are good or bad, I've always had a soft spot for horror films from the 1970s and 80s. Scream Factory has been doing an excellent job in recent years of sprucing those films up and giving them the Blu-ray treatment they deserve (which is, in some cases, more than they deserve), pleasing fans of horror and cult films alike.

Most recently they have released two cult semi-classics, Joe Dante's The Howling (1981), and Tobe Hooper's Lifeforce (1985). The Howling is perhaps the most well known, if for no other reason than for the plethora of sequels that it spawned. Lifeforce is more of an odd duck, a strange horror/sci-fi hybrid that features vampires from outerspace.

Both Dante and Hooper are horror icons, of course. With Dante helming Gremlins, Piranha, and a segment of The Twilight Zone: The Movie, while Hooper is the mind behind such films as The Texas Chainsaw Massacre and Poltergeist. 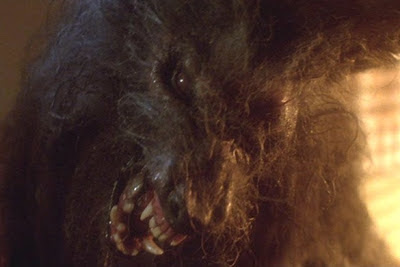 The Howling was released the same year as John Landis' An American Werewolf in London, both of which featured impressive, but completely different, makeup design. Legendary makeup wizard Rick Baker was originally slated to work on the film, but left to do American Werewolf, leaving his assistant, Rob Bottin, to take over makeup duties on The Howling. It's interesting watching the difference between the two approaches, and ultimately I think The Howling is the weaker film, but both have their merits. It's certainly ot your typical werewolf movie - a news reporter (Dee Wallace) has a traumatic experience after being used as live bait for a serial killer, and heads off to a secluded retreat center populated by, you guessed it, a colony of werewolves.

It seems surprisingly slight when held up in relation to his other films, but The Howling features some effective scares. Dante is great at creating an atmosphere, and the air of mystery and dread that surround the camp is palpable. He may have been working with a low budget here, but he makes the most of it. Dante manages to overcome his limitations to some degree, but the film itself never quite leaves the middle of the road. It's not as exciting as Piranha or as fun as Gremlins, although Dante does stuff the film with some nifty inside jokes for film fans. 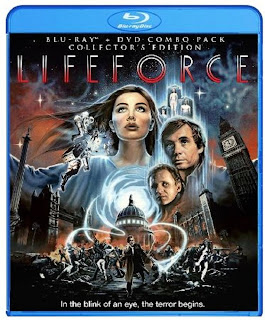 Lifeforce, on the other hand, is a film that's hard to classify. Part horror, part sci-fi, completely bizarre, it's really unlike any other movie out there. But when you're dealing with a movie about space vampires, it's safe to assume you're in mostly uncharted territory. Based on the novel by Colin Wilson, Lifeforce tells the story of a space shuttle tasked with charting Halley's comet, where they discover a derelict vessel containing three perfectly preserved human bodies.

After returning them to Earth, the bodies awaken, and begin draining the energy out of their victims, regenerating themselves and turning everyone they encounter into energy vampires like themselves. With the ability to turn themselves into bat-like creatures, these are the source of the vampire myths of old, returning to Earth to feed on its population. With their curse spreading like a virus, a small group must find a way to stop them before it engulfs the entire planet. 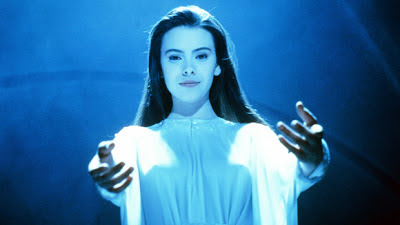 With a bold, brassy, John Williams-esque score by Henry Mancini, Lifeforce certainly feels like a big sci-fi epic. The special effects (supervised by Star Wars wizard, John Dykstra) are surprisingly strong, even if some of them are a bit hokey now, but its hard not to get caught up in it, if for no other reason than for its striking originality. It's a fascinating genre amalgam, borrowing from the likes of Alien and 2001: A Space Odyessey and then charting its own unique course. It has a tendency to get too caught up in the details of its strange plot, but overall the film is a strong and oft-overlooked piece of 1980s science fiction.

Scream Factory's Blu-ray presentation of both films is excellent, both in terms of the transfers and the extras. The films look great, sharp without losing that film-like quality that movies like this need, and the extras provide in-depth looks at the making and legacy of the films. The Lifeforce disc features some illuminating retrospectives with the cast, while The Howling actually takes time to remember is countless sequels and how they relate to the original. Fans will also be pleased by the appealingly retro artwork on both discs, recalling the horror VHS tapes I used to rent as a kid. For fans and the uninitiated, both are great genre discoveries and top of the line releases from one of horror's most stalwart champions.