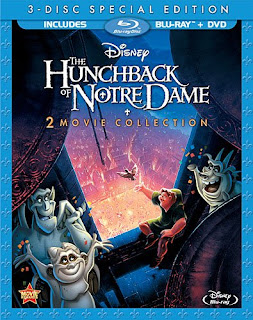 While they may not completely ignore its existence like the more infamous Song of the South, The Hunchback of Notre Dame has always felt a bit like the red-headed stepchild of the Disney musicals.

It's not hard to see why. Beyond the oft-overlooked Black Cauldron, Hunchback is perhaps Disney's darkest animated work. It's a strange choice for an animated musical to be sure. Victor Hugo's classic novel is a labyrinthine exploration of social standards, sexual desire, religious hypocrisy, and genocide. For Disney to tackle such a decidedly grown up work was a tall order, and while its thematic content was severely watered down, it remains surprisingly present.

Sure, Disney's Hunchback ends on a much more upbeat note than did Hugo's novel, in which basically everyone died. But how many Disney film's have villains that are motivated purely by an insatiable sexual desire for the movie's heroine? 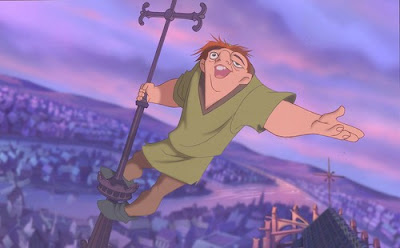 Frollo (memorably voiced by the late Tony Jay), is perhaps one of Disney's most frightening villains. Unlike many Disney villains, Frollo isn't seeking power so much as he is trying desperately to hang onto it.  A ruthless judge, he seeks to wipe out Gypsies from Paris, a group he sees as a menace that must be destroyed. He also greatly desires the Gypsy Esmerelda (Demi Moore), a feeling that is in direct conflict with his hatred of her race. His young ward, Quasimodo (Tom Hulce), has been locked away in the bell tower of Notre Dame because of his appearance, and the film deals very much with ideas of beauty and social acceptance. That makes Quasi a unique character in the Disney canon, most of whose lead characters are flawless. It also features one of Alan Menken's best scores, featuring gothic choirs and Latin chants, with memorable songs that explore deeper themes than the average Disney film. Frollo's song, "Hellfire," is especially strong, and pushes the boundaries of the film's G-rating with its images of a scantily clad Esmerelda tempting Frollo from his fireplace.

These elements probably helped seal the fate of Disney's 90s hand-drawn musical phase. Only two more would be produced, Hercules and Mulan, but by then the nail had been hammered in the coffin and the world was moving toward CG animation. None of them had reached the heights of Beauty and the Beast or The Lion King, but despite that, Hunchback remains one of the Mouse House's strongest works. Its Blu-ray release is long overdue, and while packaging it with its wholly unnecessary sequel may be a questionable decision, how else are they going to get people to buy the second one? The Blu-ray transfer is superb, showcasing some of the most jaw-dropping hand drawn animation Disney ever produced (Notre Dame is exquisitely rendered), and the packaging is attractive, even if the special features remain disappointingly scant. I wish Disney would quit treating Hunchback as a minor film, because it is anything but. It is a great paradox, a film denied commercial success because of its darker themes, but a film that succeeds artistically for those very reasons. The Hunchback of Notre Dame remains a sort of lost Disney masterpiece, underappreciated for the great work that it really is.